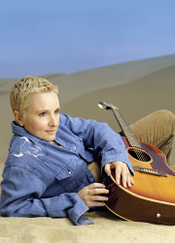 OK. I like Melissa Etheridge as well as the next rocker.

But c’mon…is she really the person you want interviewing the next President? What? Were none of the Queer Eye guys available? Once again, ala The Advocate, the Gay community leadership, in their slavish currying of favor with the hetero-market, confuse "fame" with "important." Are they really prepared to say that young Gay America can’t be interested unless there’s PeepHole Magazine — sorry, I mean People Magazine content? Why was Keith Boykin just sitting in the audience? Oh…right…they already had their African American. I find it very hard to believe…and understand…that they couldn’t find a Lesbian journalist or activist.

Melissa comported herself just fine. Forgive me for thinking we might have been able to come up with someone a tad more, I don’t know…appropriate?

I was torn as I watched the Presidential "debate" last night. Granted, as we are being constantly being reminded, this forum would never have happened a few years ago. Again, we are being told to be grateful for the crumbs we get from the Democratic Party table. And if you wanted to feel good…because "feel good" is what it’s all about anymore, right?…then Dennis Kucinish had to make you feel warm and puppyish all over. Kudos to HRC, who I have little if any respect for, for accomplishing…I don’t know…what? Citizen participation in the electoral process? Logo, too. Thought the audience reminded me of the early photos of second generation Mattachines who made all the women wear dresses and all the men wear suits so we didn’t scare the straight people.

Bill Richardson, on the other hand, is obviously a clueless homophobe trying to convince everyone how well-meaning he is. The "squirm moment of the evening" tiara goes to him, hands down. It was gratifying that someone bothered to confront his "maricon moment" for which he gave a most unbelievable and insincere apology.

And yet, after all was said and done, and everyone made their "ick-factor" excuses for not providing equal rights as provided under the Constitution, nobody…that would be not one of the candidates, not one of the questioners and not even the moderator…bothered to make the distinction between civil marriage and ecclesiastic matrimony.

One is a civil right; the other is a religious ritual.

In theory, there’s supposed to be some sort of separation there.

Obviously, no one gets it.