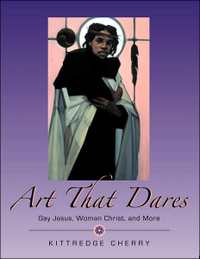 Editor’s Note: Regular readers of White Crane will recall this book from our Friends issue, in which, in addition to the beautiful cover image, several images from the book were published in connection with a show at JHS Gallery
in Taos, NM  (www.jhsgallery.com)

Kitt Cherry’s newest creation is wonderful, mind-blowing, and beautiful. White Crane readers will recognize her name from previous mentions of her equally mind-blowing novel, Jesus in Love, which presents an autobiography (i.e., told in the first-person) of Jesus Christ as a modern psychologically sophisticated and sexually aware ego-person. Cherry is a lesbian former MCC minister, now in semi-retirement, and author of a book for young people on coming out and a guide to lesbian and Gay worship and ceremonies. She is also an art historian. And it is in this last identity that she has collected paintings, photographs and graphics that depict what might be called “alternative” versions of Christian imagery.

This book is effectively a “catalogue” of an exhibition she mounted at the JHS Gallery in Taos, New Mexico, as part of the National Festival of Progressive Spiritual Art, in May 2007. It includes beautifully reproduced images of some eleven artists, along with in-depth articles about each artist and explanations of the themes in the selected examples. The subtitle reveals just why “explanations” are in order: “Gay Jesus, Woman Christ, and More.” The introduction contains an account of Cherry’s motivation in searching out this truly “visionary” style of artistic expression and an intelligent discussion of the meaning of the oh-so-religious-sounding term “blasphemy.”

You can imagine she’s had that epithet hurled at her!
Her “blasphemy” is so honest, so respectful, visionary, and inspiring that it becomes a kind of new religion, a Christianity not stuck in literal old stories, but alive with imagery meaningful to us today — not the Jesus of history 2000 years old, but the mystical Jesus of the present NOW, alive in human beings today, suffering and resurrecting through the struggles of modern life and of sexual and gender liberation.

Cherry explains that blasphemy refers to speech intended to transgress or express contempt for central religious beliefs, in that sense, the idea is to protect the status quo religion and culture. But in effect, blasphemy is what wakes people up and forces them to rethink their unquestioned cultural beliefs and myths. In that sense, blasphemy is the truly spiritual tool for transforming consciousness. Jesus Christ, after all, was put to death for blasphemy.

I suppose not all blasphemous speech or art wakes people to the true meaning of religion, but the very fact that a believer would feel so threatened that he or she would hurl accusations at another of this sin ought to tell them something about their own precarious hold on truth. It’s like the Jungian  notion of “the shadow” that what upsets you the most — and the most compulsively in other people — is a reflection of traits in yourself you are trying to protect yourself from recognizing and admitting. Being upset by somebody else’s beliefs one disagrees with is some sort of sign of one’s own skepticism. And so the more the beliefs seem meaningless, the more fiercely they have to defended.

The sinfulness of blasphemy is based on the first of the Ten Commandments: Thou shalt make no graven images. Jesus, of course, transformed those commandments, reducing them to two: love God and love your neighbor. And as Christianity moved into Europe in its early missionary days, it dropped the objection to graphic images altogether. That was a desert thing! Nomads — Jews and later Muslims — objected to depictions of God. Greek, Roman and European cultures exulted in creating representations of God. Indeed, during the Middle Ages, the stained glass windows of the great cathedrals were the catechisms by which the religious stories were portrayed and promulgated. The imagery made the stories more real — and memorable — and provided insight into their meaning.

That’s exactly what the image, say, of a female Christ — like that of acrylic artist Jill Ansell — does: causes the viewer to think through the contradiction and to understand “Christ” as a mystical reality which necessarily includes both male and female since humankind includes both male and female. The image of a woman rising from the tomb triumphant reminds us vividly that the Christian message about resurrection includes the feminine principle as well as the masculine.

Depictions of Jesus are often “homoerotic” in that he is prototypically shown near naked and suffering the afflictions of the flesh. Oil painter F. Douglas Blanchard portrays Jesus as a modern Gay man in modern clothing being brutalized by police and by fag-baiting protestors. The disturbing, but ultimately glorious, series of twenty-four painting, of which five are included in the book, force the viewer to consider that anti-Gay violence in the name of religion is an exact parallel to the violence done against Jesus and which Christians believe was salvific for us all.

With paint on plexiglass Alex Donis produced faux stained glass windows showing improbable combinations in an intimate kiss — John Kennedy and Fidel Castro, the Pope and Gandhi, Adolf Hitler and a Holocaust survivor—to call into question conventional dualistic categories. Reproduced in the book are the kisses of Jesus and the Hindu god Rama and Mary Magdalene and the Virgen de Guadalupe. Several of Donis’ creations were destroyed by vandals in protest against the exhibit in San Francisco in 1997.

Perhaps the most familiar artwork in the book is that of Franciscan brother Robert Lentz. His modern day Greek Orthodox-styled icons — of both traditional holy figures and modern  political and cultural characters — have been distributed through progressive and GLBTI bookstores and card shops for years. The icon of Harvey Milk, Martyr is a national Gay treasure. (Since Lentz returned to the Order later in his life, he’s been forbidden for marketing the more controversial of his icons, but they are still available through his previous distributor.) And the icons of Jesus as AIDS sufferer by openly Gay ex-Jesuit priest William Hart McNichols will also be familiar. They’ve appeared in the Gay press.

That’s to point out only five of the eleven artists. All the images in Art That Dares are equally striking and transforming of ideas about the meaning of religious iconography.
The book is liable to be dismissed and deprecated by the Religious Right. Some of the people who really need to see this material will never lay eyes on it. But now it’s out there. Kitt Cherry’s work has already been noticed and that condemnation, ironically, has brought needed attention.

This is a lovely book. And a very neat idea! I urge readers to seek it out.  Selections from Art That Dares are highlighted on Cherry’s internet page www.jesusinlove.org

Toby Johnson is the author and editor of countless fine books like Gay Spirituality, and Charmed Lives.  He is also former publisher of White Crane Journal and currently Reviews editor. Visit him at www.tobyjohnson.com