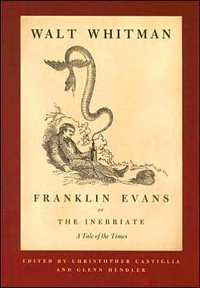 Long before Walt Whitman published Leaves of Grass, he wrote a novel, Franklin Evans, or the Inebriate, a Tale of the Times. Roundly scorned by Whitman’s biographers and critics, and disavowed later in life by Whitman himself (who claimed to have written it while drunk), the novel has been treated mostly as a curiosity. Now Duke University has brought Franklin Evans back into print with a handsome edition containing a fine introduction, two related short stories by Whitman, and Lincoln’s temperance address of 1842, edited by Christopher Castiglia and Glenn Handler. The question remains: will this book be of any interest to general readers, or is Franklin Evans only for academics and Whitman scholars?  The answer is: only somewhat.

When first published, Franklin Evans appeared not as a bound book, but as a newspaper supplement to the New World in December 1842. Released in large-format folio size, it sold for 12 ½ cents a copy. And it sold well — approximately 20,000 copies — making the novel by far the most widely read of Whitman’s work during his lifetime.

Readers interested primarily in the social history of the country will find much here that is compelling. The temperance movement was the first wide-spread social reform movement in the United States, and the novel’s greatest claim to interest from a wider readership comes from what it reveals about that movement.

Temperance stories were the bodice-rippers of the 1840s.  Under the guise of moral uplift, they treated readers to graphic scenes of violence and crime, featuring such underworld characters as prostitutes, thieves, wife-batterers, and the like. These stories titillated readers while adhering to a strict formula tracing an individual’s downfall and degradation as his alcoholic consumption worsens, then providing a happy ending thanks to his reform and the signing of a temperance pledge. Whitman sticks to the conventions for the most part, combining sensationalism with rank sentiment. But he tacks on some of his own additions as well: a marriage to a former slave, the loss of an investment to a swindler, the saving of a drowning child — and, for our happy ending, the completely unmerited inheritance of a fortune from a dying acquaintance.

Anyone familiar with Whitman’s democratic idealism will be surprised by several elements of the novel.  These include a defense of slavery. Whitman’s narrator tells of a sojourn in Virginia, and his host Mr. Bourne, a “gentleman planter” who “became convinced of the fallacy of many of those assertions which are brought against slavery in the south.  He beheld, it is true, a large number of men and women in bondage; but he could not shut his eyes to the fact, that they would be far more unhappy, if possessed of freedom. He saw them well taken care of—with shelter and food, and every necessary means of comfort…”

Also surprising is Whitman’s warning of the evils of urban life. We are used to thinking of Whitman as a celebrator of cities, but in Franklin Evans he says repeatedly that they are “pestilent places, where the mind and the body are both rendered effeminate together” by "the dangers that surround our young men" who can so easily be ensnared “with the seductive enchantments which have been thrown around the practice of intoxication.”

One character, Mr. Lee, warns the narrator from the back of a carriage, even before he has entered New York for the first time: “You are taking a dangerous step, young man.  The place in which you are about to fix your abode, is very wicked, and as deceitful as it is wicked. There will be a thousand vicious temptations besetting you on every side, which the simple method of your country life has led you to know nothing of. Young men, in our cities, think much more of dress than they do of decent behavior. You will find, when you go among them, that whatever remains of integrity you have, will be laughed and ridiculed out of you. It is considered ‘green’ not to be up to all kinds of dissipation, and familiar with debauchery and intemperance.  And it is the latter which will assail you on every side, and which if you yield to it, will send you back from the city, a bloated and weak creature, to die among your country friends, and be laid in a drunkard’s grave; or which will too soon end your days in some miserable street in the city itself. It is indeed a dangerous step!”

Whitman even condemns boarding houses, which he himself continued to live in for most of his adult life. His reformed narrator, at the end of the novel, asserts: “Boarding-houses are no more patronized by me…The comforts of a home are to be had in very few of these places; and I have often thought that the cheerless method of their accommodations drives many a young man to the bar-room, or to some other place of public resort, when the road to habits of intoxication is but too easy.” He goes further, adding this ironic vote for heterosexuality: “I would advise every young man to marry as soon as possible, and have a home of his own.”

The reader can certainly complain of lots of bad writing here. Franklin Evans does its share of sermonizing and finger-wagging. The novel is too quick to veer off onto tangents. The women characters are all one-dimensional. And a couple of times, the point of view changes abruptly from a subjective first-person to an omniscient narrator.

But there are also glimpses of the young poet’s developing voice. The novel reveals a belief in the power of words to change the lives and influence the actions of individual readers, most of whom would have come from the working class. Joined with more original language, this conviction would give Leaves of Grass, written a decade later, its passion and force.

Kim Roberts edits Beltway Poetry Quarterly and  is the author of Wishbone Galaxy and the recently published The Kimnama.  Visit online at www.kimroberts.org