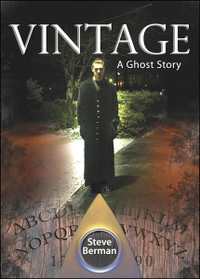 Steve Berman, author of Vintage, has become an integral member of the White Crane family in the past year. In addition to being a writer, Berman is also an activist in Gay genre publishing and a very competent editor. My own writing has benefited significantly from his literary astuteness and advice.

To publish a collection of his own short stories, Trysts: A Triskaidecollection of Queer and Weird Stories, in 2000, riding the wave of the Internet and state-of-the-art desktop publishing, Berman established Lethe Press out of his discovery of how desktop publishing has created a new kind of publishing industry, one built on literary experimentation through print-on-demand technology, not big-money investing in blockbuster pop hits.

Berman also saw a mission in keeping Gay classics in print and available to Gay booksellers and the internet connected public. Because my book Gay Spirituality was one of the first such books Lethe selected to save from oblivion when Alyson, though a Gay-owned company, declared it “out-of-print” despite its winning a Lammy, I forged a connection with Steve Berman. Gay spirituality titles were especially likely to be declared O.P. after a short life because they appeal to a limited audience. And, of course, part of the whole enterprise of the Gay Spirituality Movement is to keep alive Gay wisdom in order to validate and redeem our hidden history. So Lethe Press’s mission made great sense. And Steve Berman’s facility with state-of-the-art publishing made him a logical partner. He knew how to do it and he had established business relationships with distributors and booksellers across the country. White Crane’s current editors, Bo Young and Dan Vera, have now concretized that connection in forming White Crane Books as an imprint of Lethe Press. In every issue of White Crane now readers will likely find a full page ad for White Crane Books and Lethe Press titles.

Steve Berman had his own supernatural thriller Vintage published by Harrington Park Press. Vintage is “a smart and stylish work of contemporary Gay fantasy with a gothic twist,” the back cover advertises. As the subtitle reveals, it is a ghost story. In some ways, the novel follows the accepted conventions of the ghost story: an unhappy soul haunts a section of highway not realizing that he is dead and so causes problems for the living, the plot of the novel is how the ghost is allowed to rest. But Berman’s added a neat twist — actually two twists. The first is that the main characters who experience the haunting and then try to do something to help the ghost are modern day goth teenagers with a penchant for dressing outlandishly in black (with maybe a little mascara for effect), drinking and drugging with reckless abandon, and driving their parents crazy. The novel is told in the first person of one of these teenagers; Berman has got the jargon and voice down pat to introduce the reader to this goth Holden Caufield with a cellphone and taste for ecstasy and peppermint schnapps.

The second twist is that the main character is Gay; he’s living with a liberal-minded aunt because his uptight parents told him to leave when his homosexuality was made embarrassingly public. He’s got a job working in a retro fashions and used clothing store and made friends with several teenage girls, including a young Lesbian couple, who frequent the store looking for goth costumery. And the ghost that’s haunting the highway on the outskirts of town was himself a teenager of the 1950s who died mysteriously after his own homosexuality was made embarrassingly public — maybe he was murdered; maybe by the guy he was in love with; maybe in an act of homophobia.

There are twists and turns in the plot. The resolution is delightfully satisfying. Even the ghost is happy by the end and can go to his rest. And the teenagers turn their goth fascinations toward adulthood.

The most interesting and well-written section of the story revolves around the protagonist’s infatuation with the ghost — and the ghost’s with him. It’s not giving away too much to reveal that the ghost died longing for love and conflicted about his sexuality and so when the goth teenager shows up dealing with the same issues, a strange relationship develops. The description of their lovemaking is both arousing and exciting and creepy and, literally, chilling. For the ghost’s affections turn out to suck the life and warmth out of the living boy and he has to struggle against his own conflicts with growing up Gay to avoid following the ghost into icy death.

Vintage: A Ghost Story isn’t exactly a White Crane Book of Gay wisdom. But it certainly plays on the Gay interest with consciousness on the margins. It’s a fast read, entertaining, and just delightfully chilling. The reader too will be happy, warmed up, and satisfied when the steaming hot peppermint-flavored cocoa is served at the end — and Gay love saves the day.

Toby Johnson is the author and editor of countless fine books like Gay Spirituality, Charmed Lives and Secret Matter.  He is also former publisher of White Crane Journal and White Crane’s current Reviews editor. Visit him at www.tobyjohnson.com