January 15th is a red letter date in GLBT history, and particularly in the history of Gay publishing (blogger Jim Burroway has a very nice remembrance of this at Box Turtle) and in light of the recent passing of Mattachine assimilationist, Kennith H. Burns in Los Angeles it seems even more trenchant.

Fifty years ago, a Supreme Court unsullied by religion and right-wing fundamentalism ruled in One Inc. v Oleson that a magazine for Gays and Lesbians could be sent through the mail and not be seized as pornography, per se. To be entirely accurate, One Inc. v. Oleson was on the docket for the Court when they decided Roth v. United States, which vaguely held that "pornography" could have "no sociably redeeming value" and the court went on to issue a one sentence per curiam i.e. "by the court" with no assigned findings included, — much as Gore v. Bush was decided, incidentally — that the lower court ruling against One Inc. was inconsistent with Roth so it could, indeed, be published and mailed.

Under the  editorial leadership of Martin Block, Dale Jennings, Don Slater and Donald Webster Cory, ONE magazine was a first class product, a dramatic departure from the underground, mimeographed and stapled sheets which were more common at the time. In the throes of McCarthyism, the sophisticated and slickly produced one reached the astounding readership of 2,000 (more, sad to say, than this magazine reaches, now, 50 years later). 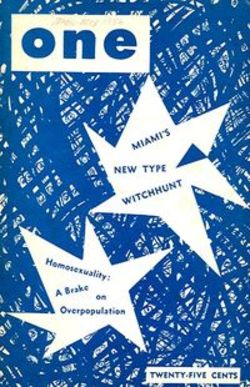 ONE’s  tone was bold and unapologetic, covering politics, civil rights, legal issues, police harassment (which was particularly harsh in One’s hometown of Los Angeles), employment and familial problems, and other social, philosophical, historical and psychological topics. Most importantly, ONE quickly became a voice for thousands of silent gays and lesbians across the U.S., many of whom wrote letters of deep gratitude to ONE’s editors.

In January 1953 ONE, Inc. began publishing ONE Magazine, the first U.S. pro-gay publication, and sold it openly on the streets of Los Angeles. In October 1954 the U.S. Postal Service declared the magazine ‘obscene’. ONE sued, and finally won in 1958, as part of the landmark First Amendment case, Roth v. United States. The magazine continued until 1967.

ONE also published ONE Institute Quarterly (now the Journal of Homosexuality). It began to run symposia, and contributed greatly to scholarship on the subject of same-sex love (then called "homophile studies").

ONE readily included women, and Joan Corbin (as Eve Elloree), Irma Wolf (as Ann Carrl Reid), Stella Rush (as Sten Russell), Helen Sandoz (as Helen Sanders), and Betty Perdue (as Geraldine Jackson) were vital to its early success. ONE and Mattachine in turn provided vital help to the Daughters of Bilitis in the launching of their newsletter The Ladder: a lesbian review in  1956. The Daughters of Bilitis was the counterpart lesbian organisation to the Mattachine Society, and the organisations worked together on some campaigns and ran lecture-series. Bilitis came under vicious attack in the early 1970s for ‘siding’ with Mattachine and ONE, rather than with the new separatist feminists.

In 1996, ONE, Inc. merged with ISHR, the Institute for the Study of Human Resources, a non-profit organization created by transgendered philanthropist Reed Erickson, with ISHR being the surviving organization and ONE being the merging corporation. The organization also merged with Jim Kepner’s International Gay and Lesbian Archives. The current organization entitled the ONE National Gay and Lesbian Archives onearchives.org is the world’s largest gay and lesbian archives. It is located in Los Angeles near the campus of the Uuniversity of Southern California. It holds the archives of ONE Magazine, ONE INC., and many leaders of the early gay movement including Dorr Legg, Pat Rocco, Morris Kight, and the LA Gay Center, as well as numerous audio and video tapes of ONE INC and other early gay panels and programs.

White Crane stands in awe and respect of those who went before us.