I had the immense pleasure of seeing an amazing play recently. What makes the pleasure all the more thrilling is that the play was written more than 400 years ago, by an ancestor who was nothing less than Shakespeare’s chief competition! As we plan the spring issue of White Crane on Ancestors, it was deeply satisfying to see this production made possible by no less than three major Gay allies or ancestors, Christopher Marlowe, Garland Wright and Edward II himself (kudos to the still with us — and with it! — Red Bull Artistic Director, Jesse Berger, too, of course!)

Starting with the historical Edward: he was the first "Prince of Wales." He is the king who established colleges in the universities of Oxford and Cambridge; he founded Cambridge’s King’s Hall in 1317 and gave Oxford’s Oriel College its royal charter in 1326. And yes, he did have a tendency to sort of ignore his "nobility" (pre-shadowing Whitman’s "working class camerado’s" by a couple of centuries) and run around with sexy, young minions. Marlowe took a collection of "favorites" and created the archetypal character of Piers Gaveston to represent Edward’s "proclivities." Companions had been brought over from France to teach the young prince how to be a gentleman. If they only knew. Ahhh…if we only knew. 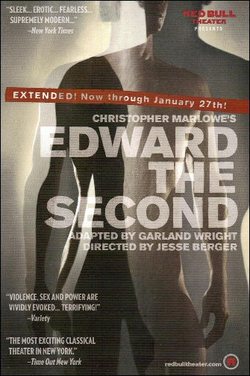 The late Garland Wright was the visionary director and a leading figure in both the New York theater scene and the regional theater movement in America, most famously as the Artistic Director of The Guthrie Theater. He died at the tragically young age of 52 while in the middle of preparing this production of Christopher Marlowe’s legendary Edward II. His commitment to Gay causes, particularly his opposition to Don’t Ask, Don’t Tell brought him to an interest in Marlowe’s Edward.

There is no way I can improve on the review of the play in the NY Times and other places. Does it ring any bells to say this is the story of a leader whose lover distracts him from his duties, tells the story of sexual obsession, religious power and the intersection of the political and personal lives of a flawed leader. Throw in some church/state tensions and you might well be talking yesterday, not 400+ years ago. Add Queer As Folk’s blond boy Randy ("Justin") Harrison in a featured (and, I might add, impressive…newly hirsute-for-this-play Mr. Harrison is virtually unrecognizeable, "boy " no more…this man can act!) role, and you have a damned sexy and theatrically fascinating evening.

It is tempting (and wrong) to believe  that the modern GLBT civil rights movement is the first time a movement has attempted to upset the social order (and despite what the assimilationists would have you believe, this is what it’s about, dear ones) and create an alternative to traditional gender roles, definitions of sexuality and hierarchal power structures. It is bracing to realize that Marlowe was doing this 400 years ago, before there was any other word for who we are than "sodomy." There was no "Gay," no "homosexual," no "same-sex love." It was sodomy, plain and simple, and a clear demonstration of the implicit role church has played in statecraft since its earliest days.

Further, this is the story that first turned this writer off Mr. Mel Gibson, waaaay before his drunken, entitled, anti-Semitic outbursts. His gratuitous and flat out historically wrong-headed re-telling of the murder of Edward’s beloved, Piers Gaveston, in Braveheart, where Gibson has Edward’s father (who was dead before any of the gist of the story we know happened) throw Gaveston out of a tower to his death made Gibson persona non grata in my eyes. Hollywood’s traditional "kill the queer" has never been more distasteful to me than it was in that horrible movie.

But, back to happier stories…the king and his beloved frolic on a wildly sexy set, in costumes (and the tasteful lack thereof) that reinvents the whole "suit and tie" Shakespeare fad. This play is gripping, intellectually and visually, from the dimming of the lights to the last ovation.

In a word: Run, don’t walk, to see this play at the Red Bull Theater on 42nd Street. Its run has been extended through the end of January. This is a must-see.