So….Happy new year to all of you. We all took a little time off over the holidaze. Traveled a bit. Saw friends and family. Not all of them, but most of them and it was nice. When an operation like White Crane is basically done by two of us, it helps a lot to take a little time off every now and then.

And then, just after New Year’s, my partner Bill and I decided to take a little ride with our friend Bev’s car (she was in Kentucky for the week, and let us use her car while she was out of town…and we take care of her cats, too and then pick her up at the airport.) We’ve been talking…ok, I’ve been talking …about getting a dog. I swoon every time I see a puppy on television. So we decided and agreed to take a ride to the North Shore Animal Shelter to see what they had. Just to see, mind you. 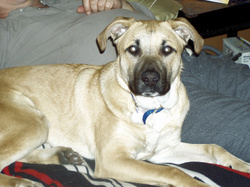 And this is what happened. Or, I should say, and Brewster happened. I swore I wasn’t going to take home a dog. We sort of poked around and played with the puppies, of course. Too cute for words. One set of shepherd puppies were so adorable it just would have broken my heart to split them up. And then there’s the whole matter of housebreaking…and never having had a dog before, I’m a little nervous about these things.

I guess this is one of those proud parent things, but I just don’t the camera is doing my puppy justice. Brewster is full grown, a year old and still every inch a puppy. Still isn’t quite sure what to do with those long legs and is quite comical as he chases after a new toy. And the peeing and pooping in the house is still something we’re discussing. The North Shore Animal Shelter’s idea of "housebroken" and my idea of "housebroken" seem to have diverged somewhere. Fortunately, if one 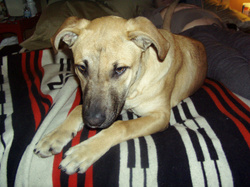 has dumpster dived his entire household, it’s not so hard. We all slept together the first night like a good pack should. Bill insisted that Brews get used to his crate last night so he could get his part of the conjugal bed back. Brew balked a bit at first. He made some very sound arguments, but very quickly quieted down (which was one of the things that attracted me to him in the first place…in the midst of all the craziness of a animal shelter with dogs freaking out all over the place, and a lot of sounds and smells going on that he couldn’t understand, Brewster showed only curiousity, and then settled very quickly, lying down at my feet right there in the shelter walk area…underneath all that puppiness is a pretty calm little guy.)

I’m still nervous…but we’re going to go out for a nice long walk now and get to know each other a little more.