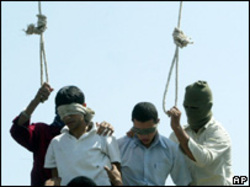 The Netherlands’ highest court on Tuesday rejected a Gay Iranian’s last-ditch appeal to avoid deportation to Britain, where he fears authorities will send him back to Tehran and possible execution.

Mehdi Kazemi, 19, traveled to Britain to study in 2005 and applied there for asylum after learning that his male lover in Iran had been executed for sodomy. After British authorities rejected Kazemi’s application, he fled and applied for asylum in the Netherlands.Upholding a ruling by the Dutch government, the Council of State said Britain is responsible for Kazemi’s case because he applied for asylum there first. European Union rules say the member state where an asylum seeker first enters the bloc is responsible for processing that person’s claim.

"There should be some political leadership," he said in an interview. "I hope in Britain they will do it, and otherwise we should take the boy."

Because of Iran’s persecution of Gays, the Netherlands typically relaxes its tough asylum rules when considering applications by Gay Iranians — virtually guaranteeing asylum to any who apply here. However, because Kazemi had already applied for asylum in Britain and been rejected, the Dutch government refused to consider his case, insisting he return to Britain.

However, Britain’s Border and Immigration Agency has issued a statement that could give Kazemi hope: "We examine with great care each individual case before removal and we will not remove anyone who we believe is at risk on their return."