The Fable of City Moe and Country Les
by Jesse Monteagudo

Once upon a time a young Gay man named Moe left his home in San Francisco to visit his Lesbian cousin Les. Les lived with her partner and their children on a farm outside Corvallis, Oregon. She welcomed cousin Moe’s visit, which gave her an opportunity to show him the pleasures of life in the country. From the moment that Moe arrived, Les and her partner took him around Corvallis, fed him home-cooked meals and gave him a cozy bed to sleep in. Though Moe appreciated his cousin’s hospitality, he could not understand why she and her family opted to live in the country, away from San Francisco’s bustling queer community.

“I don’t know, Les, how you can live in  place like this, away from the amenities of big city life. San 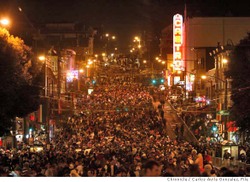 Francisco has a large, politically powerful Gay community; a variety of community-oriented businesses and organizations; and a lively social life. I can walk down the Castro holding my boy friend’s hand everyday, which you and your partner can not do around here. And while we in California now enjoy domestic partner protections, you folks in Oregon are still debating whether or not Gay people should even be protected by law. You even had a local right-wing demagogue, Lon Mabon, running for the U.S. Senate.”

“Actually, the Oregon legislature just passed a domestic partners bill. And Mabon lost the election. But I agree that I cannot hold my partner’s hand on Main Street in Corvallis. And I agree that Oregon is full of anti-Gay bigots, just like any other state. But this lovely town, and its surrounding country, are great places to live in. Corvallis is a beautiful college town nestled in the heart of Oregon’s lovely Willamette Valley. We enjoy a wealth of performing arts and festivals as well as galleries, antique shopping and wineries. Corvallis is also the home of Oregon State University, which gives this community a youthful vitality that you can not find even in San Francisco.”

But Moe was not convinced. “Come back with me, Cousin, to San Francisco.  This Sunday is the Gay Pride Parade and I want you to see it.” Finally, Les agreed to follow her cousin back to San Francisco, though her partner and children could not join them, because she had never been to a Gay Parade and wanted to see it. As soon as Les arrived in San Francisco, Moe and his boyfriend set her up in the guest room of their posh loft that overlooked Castro and Market Streets. From that vantage point, they could watch San Francisco’s Gay Pride Parade in all its glory.

It was a magnificent sight. From Dykes on Bikes to the Sisters of Perpetual Indulgence, the San Francisco Gay Day Parade lived up to all of its expectations. Half a million people attended this magnificent event, a testimonial to the GLBT community’s clout in the City by the Bay. Les could only smile as her cousin proudly pointed out the different floats and marching units, which represented the various businesses and clubs and organizations that catered to their community. All this would be at her disposal, he said, if she and her family moved to San Francisco.

“Don’t you love it here?,” Moe said to his cousin, as they walked down Castro Street after the Parade.  “Imagine the opportunities for you and your family.”

“I agree that San Francisco is a nice place to visit, but it’s too expensive to live here. Both you and your boy friend make a lot of money, and can afford to live in a faboo loft overlooking the Castro. My partner and I have a couple of kids, and you need bigger housing to raise a family. And a big house is an expensive house. That is why we like to live near a college town like Corvallis. It combines the amenities of country life, like cheap homes, with a progressive, tolerant attitude. Besides, there is a lot of crime, dirt and homelessness in San Francisco.” As if to prove her point, a man tried to steal their bags, but was kept from doing so by a well-placed karate chop from Les.

“I cannot agree with you,” said Moe. “My boy friend and I would be bored to death if we lived in Corvallis.  This is our home,” he said, pointing at a crowd that gathered in front of the Castro Theater. “Our friends are here, as well as all the Gay clubs, Gay shops, Gay restaurants and Gay theater,” he added.

“I understand, Cousin,” Les answered, as she said good-bye to Moe. “And I admit I had a good time here.

But San Francisco is not for me. Still, you have your life and I have mine, and each one of us picked a place to live that’s best for each one of us. Hopefully, some day all of us will be able to live the way we want, anywhere we want to.”

Jesse Monteagudo is a freelance author who lives with his partner in the suburbs.  He got his inspiration from the beloved Tale of the Town Mouse and the Country Mouse, by the immortal Aesop. He (Jesse, not Aesop) can be reached at jessemonteagudo@aol.com.

One thought on “Fable of City Moe & Country Les”