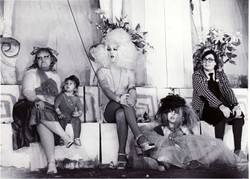 Join the largest New York gathering of Cockettes since their theatrical catastrophe at the Anderson Theater in 1971. In 1968 this psychedelic-fueled gender bending troupe of men, women, children, Gay, straight and in-between became legendary for their performances at San Francisco’s Palace Theater. At the cultural forefront of Gay Liberation, these bearded hippie drag queens showed generations to come the creative potential within us all. Moderated by Steven Watson, chronicler of the American avant-garde and author of Factory Made, The Beat Generation and The Harlem Renaissance, and hosted by John Waters’ superstar Mink Stole and HRH Lee Mentley of the Hula Palace, the evening promises to be historic. Cockettes scheduled to appear include Scrumbly, Sweet Pam, Rumi, Fayette, Harlow, Jet, Tahara, Sebastian, Toots Taraval, Jim Campbell and Dolores DeLuce.

A Cockette Symposium is one of a series of events in New York the first week in June will bring a dozen of the original Cockettes together on the East Coast for the first time since 1971 to mark the donation of the Martin Worman Cockettes / Gay Theater Archives to the New York Public Library for the Performing Arts, Billy Rose Theater Division at Lincoln Center.

The other events include:

The Northeast Radical Faeries and the Sisters of Perpetual Indulgence Present

THE COCKETTES ARE COMING:

Monday, June 2. Bazaar, Refreshments and Films from 6:30 to 8 p.m. Performances at 8 p.m.
At Theater for the New City, 155 First Avenue at 10th Street.
Admission, $30. Bake Sale and Bar, Faerie Wares and Services—Priceless

Rumi Missabu of the Cockettes & the Camaraderie Art Salon present:

A COCKTAIL OF GLAMOR AND ANARCHY

The Cockettes emerged from the communal movement in San Francisco in the late 1960’s. Founded by Hibiscus and other members of beat writer and publisher Irving Rosenthal’s Kaliflower commune, the Kitchen Sluts, as they were first known, would entertain as they delivered food and newsletters from Rosenthal’s Free Press to an intercommunal food network of over 300 households. Known for their outrageous bearded drag, sequins, glitter and camp, the queerly androgynous troupe made street theater and performance history on the stage of the Palace Theater at the Nocturnal Dream Shows, midnight showings of camp film classics. Word of their shows spread by word of mouth and through San Francisco Chronicle columnist Herb Caen. The Cockettes were officially discovered by Rex Reed, Truman Capote and Joanna Carson and were whisked off to New York where they were feted by Vogue editor Diana Vreeland and held court at Max’s Kansas City. Their cockeyed optimism was welcomed by many but at odds with the irony and cool of New York during the Warhol era. Those who flocked to see their premiere at the Anderson Theater included Anthony Perkins, Allen Ginsberg and John Lennon. As Sylvia Miles said, “Everybody who was anybody was there.” And they were not amused; the evening was a catastrophe. Angela Lansbury is said to have risen from her seat midway through Act One and exclaimed, “Get me the fuck out of here,” and Gore Vidal quoted Arthur Laurents’ Gypsy, “Having no talent is not enough.” After the glitter settled, the Cockettes returned to San Francisco where they created their most successful shows. Cockettes who became famous in their own right include disco diva Sylvester, Café Society pianist Peter Mintun and Cockette guest star Divine.

Martin Worman was a playwright, director, actor and lyricist during the height of the Gay Liberation movement in the 1960’s through his death of AIDS in 1993. A Vietnam Era veteran from Paterson, New Jersey, Worman left Fort Dix for a life in the theater in San Francisco where he was a member of the legendary troupe known as the Cockettes. He wrote book and lyrics for several of their most renowned shows including Hot Greeks and Vice Palace which featured John Waters’ superstars Divine and Mink Stole. He was known as “The Cockette Who Can Read” because of his multiple academic degrees, a secret he carefully guarded from the street-based, anti-professional ethos of the time.

Worman continued his musical collaboration with Cockette Richard “Scrumbly” Koldewyn, writing musical revues and plays, most notably the 1972 musical Rickets: A Day in the Life of the Counterculture. Influenced by the theater of Bertolt Brecht, Worman viewed himself as a cultural worker and saw theater as a weapon in the struggle for Gay Liberation. In 1975 he co-founded the San Francisco-based Gay Men’s Theater Collective whose award-winning play Crimes Against Nature was brought to New York. There Worman assisted Robert Wilson and Jack O’Brien, directed Lola Pashalinski in her Obie winning performance of Steven Holt’s Cold, Lazy and Elaine and adapted Sherwood Anderson’s The Man Who Became a Woman for Steven Keats at Theater for the New City. At his death he was Associate Professor of Theater at Antioch College in Yellow Springs, Ohio, where he adapted Meridel LeSeuer’s Midwest populist writings to the theater. The 90 hours of interviews he conducted with Cockettes in 1987 during the height of the AIDS epidemic include a deathbed interview with disco diva Sylvester. His unfinished dissertation at NYU on the history of the Cockettes became the basis for David Weissman and Bill Weber’s acclaimed documentary The Cockettes.

Worman created extensive archives of his work in the theater, including 600 pages of Cockette interviews transcribed by his partner Robert Croonquist who safe-guarded the archives and is now donating them to the New York Public Library for the Performing Arts, Billy Rose Theater Division at Lincoln Center.