This review of Flights of Angels has been censored at the Amazon.com website, now, five times. What is Adrian Brooks/Craig Makler afraid of? 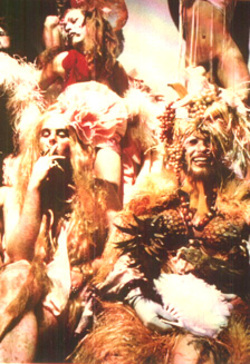 The good news is that "Adrian Brooks," formerly Craig Makler of Philadelphia (perhaps one of the more telling aspects of this book is Brooks’ obsession with revealing everyone else’s mundane and assumed names but not his own) had some good edítors, which made Flights of Angels more or less readable. So at least I could get through it. The bad news is that it’s not a very good book.  [And yes…I know the foto the left is of the Cockettes and not the Angels.]

In the final analysis, though, the portrayal of the Angels is at best superficial and somehow (despite the fact that Brooks was in less than half of the 20 shows the troupe produced) all the stories seem to center on Brooks and his "unappreciated brilliance" and supposed centrality to the troupe. As Brooks himself used to say in an aristocratic Russian character he would regularly affect, "It’s so hard to maintain one’s public image when there is no public." Despite his very high opinion of himself and his florid poetry, Brooks lives in literary obscurity in San Francisco. Bitterness and grasping self-promotion has that affect. OK…it’s a memoir. But one is reminded of the "you’re entitled to your own opinions, but not your own facts." Brooks continues to grab for credit where none is due (he recently claimed authorial credit for Paris Sites Under the Bourgeois Sea), and responds with vitriol and personal attacks when it is denied him.

It is in no small way revealing that his Tennessee Williams epigram telegraphs that what follows will have anything to do with reality and reflects nothing more than the author’s own "magical" thinking. It is a further, no doubt unintended, self-exposure that his very first sentence, "It’s impossible to encapsulate the truth about the Angels of Light" is true only insofar as Craig Makler/Adrian Brooks is concerned. Truth does seem to elude him; Flights of Angels has only a passing acquaintance with it.

It is clear that, along with any sense of decency, Adrian Brooks missed the magic. A self-serving opportunist, he missed the glue that kept this seminal troupe of artists together, many of whom are friends to this day. He missed their deep commitment to art and community while affecting his own. One gets no sense of that commitment…it seems to be so much about their selfishness, but really is more about his own.

And that’s really the point: this is a book that is much more about Adrian Brooks than it is about the Angels, who only appear as supporting players in Brooks’ self-absorbed life. One might legitimately suggest that Mr. Brooks is indulging in not a little projection when he accuses others of the sins he finds so distasteful, and is so quick to excuse in himself. In his bitterness about the missed attention of an adoring public he so richly believes he deserved (and would have you believe was denied him by the Angels) he reveals more about himself than anyone or anything else. His attacks on Beaver Bauer are shameful.

Sadly, other people who have true standing are used to lend credibility to this twisted record. Danny Nicoletta’s beautiful photos give a gloss of legitimacy to the book. It’s tempting to understand that Nicoletta wanted a place to show his work, but by now he must know it was a mistake. He isn’t the only one who should question his or her judgment. Everyone who was interviewed by Adrian Brooks had to know that Adrian Brooks was never going to give the Angels their due or be fair. Some people had grievances. Who didn’t? It’s unfortunate anyone chose to air them with him.

So much has happened to the Angels these past years, it is sad that this book is the only chronicle currently available about what was a truly amazing group and time. The Angels were recently properly feted in New York in a series of events tied to the donation of Martin Worman’s archives to the New York Public Library. The celebration at the Theater for the New City, a panel at the LGBT Community Center and other wonderful celebrations shows that this troupe’s influence and importance deserves better. Adrian Brooks’ name never came up.

UPDATE: I’m not alone in my distaste for this book. John Karr in the Bay Area Reporter weighed in this week with "The fact that it’s just about the trashiest read ever, with drugs, sex, promiscuity and dire betrayals riddling nearly every page makes it fun to read — for a short while. Then one becomes aware of the author’s imbalance. Reading this book was not enjoyable. I felt sullied. …irresponsible, distorted, slanderous, and just plain badly written are the first descriptives that come to mind concerning the book[s]…venomous, inaccurate, ludicrous text."