On June 29th India saw for the first time a nationally coordinated effort to organize Pride Marches across four major metropolitan areas. The news of the first Queer Pride March in New Delhi (the nation’s capital) has made huge splashes on all the major print and net media. The theme in New Delhi was "Global Pride". Some of the slogans read "London, Lisbon, Kolkata", "Global Pride". Images of queers of all kinds (I use the term queer which is problematic in invoking, as an umbrella term for women loving women, men loving men, hijras, kothis and all forms of identity that challenge hetronormativity) marching underneath the Rainbow Flag are all over the net. As a mid-thirties immigrant male of color located in the Midwest, I was prompt to reading it all as a celebration of cosmopolitan queerness that is hand maiden of neo-liberal notions of consumption and individualism.

On second thoughts I am reminded of the in numerous messages, wall notes, updates I have received on Facebook and different Blog-links that has been circulating about these marches. Friends from across the globe has sent messages to each other on Orkut and Facebook. I called my friend of 10yrs after several years and we giggled about the idea of marching in our hometowns next year. I am particularly reminded of a conversation that I was a part of, in Kolkata, 1994 at the British Council between Parvez Sharma (the director of A Jihad For Love) 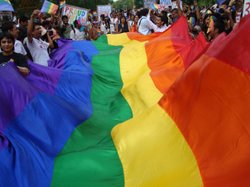 , Program Officers from British Council and  a bunch of psychiatrists. Parvez articulated way back then the need for Pride Yatra (Marches  in Hindi) in India. I resonated with the need, yet cautioned that we needed time to organize people for years, and mobilize them for rallies.

India, since the mid eighties have been pursuing a "Liberalization" agenda in both social and economic spheres. The state is now promoting itself as the miracle in neo-liberal economics and a competent ally of the US. It was interesting to see parallel rhetorics of "equality under law" and solidarity with other movements being deployed by South-Asian Queer activists across LA, New York, London, New Deli and Kolkata. The emerging queer critics of neo-liberalism are largely rooted within the framework of sexual rights and at the same time go deeper in their resistance to neo-liberalism.

For instance some of the leading organizers of Queer Delhi Rally are people  involved in struggles of homeless people, survivors of violence and student unions. In New York the South Asian Lesbian and Gay Association has constantly been rocked by issues of regionalism, religious animosities and generational divides. Yet post 9/11 a certain kind of solidarity has emerged with other people of color and labor movements, as a way of surviving a heavily securitized state. LGBT people of color leaders meet regularly with each other as a part of the Audre Lorde Project. For years we have carried posters in support of immigration reform and challenging racial profiling at Manhattan Pride parades. 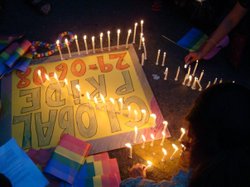 "Queer Pride" has definitely emerged as a trans-national organizing sector within South-Asian networks. These networks can be mapped globally across continents, and supra-territorial spaces such as Facebook communities facilitate their exchanges. How movement leaders are framing and strategizing is also fast becoming increasingly global and yet very local at the same time.