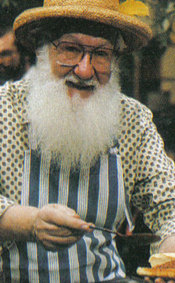 children’s characters as Big Bird, Oscar the Grouch and the Cookie Monster was a Gay man. Even the most cursory study of LGBT history shows, time and again, that same-sex people were typically …archetypically … the culture carriers and, perhaps more to the point, the teacher of children. We were always the ones in the tribe to whom the children were given to make sure they learned how to be "one of us."

Sadly, Kermit Love (now there’s a name to reckon with, eh?) who also played Willy the Hot Dog Man (at the left here) on Sesame Street, and had a whole other career designing for Jerome Robbins, Agnes DeMille and Kurt Weill, died June 21st in Poughkeepsie, New York, at the ripe and delicious age of 91. He is survived by his partner of 50 years, Christopher Lyall.

He began as a puppet designer for the Works Project Administration (WPA) and worked as a designer for Orson Welles’ Mercury Theater.

Love spoke about how he designed Big Bird so that he would subtly shed feathers in the course of normal movement, "Not unlike a tree shedding leaves in the Fall." He believed this made Big Bird appear more natural to young viewers. From this, Love went on to design Mr. Snuffleupagus. Despite the coincidence of names, Love is not the namesake for the most famous of the Henson puppets. He was quoted once as saying,"Nope. No connection. He’s Kermit the Frog and I’m just Kermit the human."

Hail and farewell to another Gay elder.