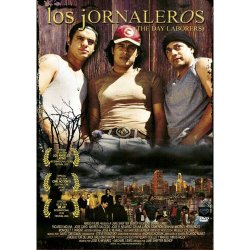 Logo just aired the movie "The Day Laborers" by director Lane Shefter Bishop. Made in 2003, this movie is poignant tale of three brothers who cross across the borders from Mexico to West Hollywood in search of job and dignity. They live under one roof with their aging uncle, and show up every morning on a street side, in hopes of being picked up for cash jobs. The film depicts the day to day on site hazards that day laborers face. One falls in love with a girl, the other finds his way into drug dealing, and the third embarks on a journey to discover his desire for men, when he meets a Gay artist.

The film albeit a Hollywood version of the lives of day laborers, does a good job of humanizing the lives of men and women who endure extreme hardships to make a decent living, whose labor is constantly exploited by the rich and the wealthy in this country. Most importantly the film deals with the intersections of sexuality and labor in a way that I have not seen most of the LGBT and Immigrant rights organizations talk about. All three of the brothers are hard working hunky studs. while one of them gets picked up by the wife of a rich client for sex on the side, the other falls in love with a white Gay man. The family struggles with paying their rent, and their brother’s "Queer relationship" at the same time.

As I sat glued to the TV watching the hunky brothers fight for their labor and sexual rights, I was reminded of the many men and women who came up to me at immigration rallies, to discuss how they have to hide their true identities at their work places. Yes my dear friends day laborers are LGBTQ too, while you might not find them on the cover feature of Genre or the Advocate, they are brave people who are silenced not just by homophobia, but also by xenophobia and labor exploitation.