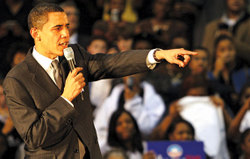 Barack Obama spoke to a crowd of 85,000 at the Invesco Stadium, and millions more watched him intently on TV tonight. The two of us (Carl and I) sat glued to the TV, carefully listening to every word that this brilliant man uttered.

I come from a long history of skepticism towards party politics, especially as an immigrant who is unable to vote, I exert my cultural citizenship by choosing to invigorate social justice movements. Carl, a mid thirties white banker, has grown to become an independent. Yet both of us absolutely liked his speech. We are waiting to see if he will prove his words by following up with solid action!

As a Queer immigrant, I was touched when he spoke about the right of our loved ones to visit us in hospitals. He said separating mothers from their children (an obvious reference to ICE raids) is unacceptable and in-humane. He talked about reducing un-wanted pregnancies. Most of all as he fiercely reminded us the indomitable spirit of the American society for ingenuity and creativity, I was reminded as to why twelve years ago I packed my bags and escaped to the US seeking freedom and better economic opportunities.

However, we live in very difficult times inside the US and globally. Globalization and neo-liberalism has fundamentally altered the economic landscapes of nation-states. The income gap between the rich and poor is at its highest, infant mortality rates in inner-city USA is higher than developing nations, farmworkers across the globe are steeped in debt, and developing nations are ever more so in debt to the World Bank.

At the heart of neo-liberal social ethics is the principle of "personal responsibility", that even the Democratic Party embraces, and Bill Clinton and Barack Obama every so often refer to in their speech. I am not opposed to the idea of responsibility. What I am opposed to is the government shrugging its responsibility towards the most vulnerable communities in our societies. While Barack very aptly referred to the dialectics between collective and individual responsibility, time will only show us if him and the Democrats will put up a good fight to save and fix social safety nets for all citizens and immigrants.

In conclusion I would like us to remember that under Obama and Biden (if elected)  we will live in  a softer imperialist-core. Our task as gender,sexuality, social justice and human rights activist is to continually hold all politicians, no matter how inspiring their speeches are, to be accountable to our needs. By needs I mean not just recognition of our diverse identities and relationships, but an actual redistribution of resources in a way, that enables all of us to achieve our best. That’s the social contract we agree upon when we call ourselves a "civil society".

Tonight, I will sleep ever more inspired to continue fighting for comprehensive immigration reform, universal access to health-care in the US, a science based HIV prevention plan in the US and globally, and for debts of developing countries to be forgiven. And most of all to hold our elected officials accountable, if needed to be challenged on issues that are dear to me.