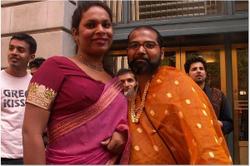 I had almost forgotten that today is the seventh anniversary of 9/11. I generally tend to make time to watch the morning news, before I get lost in the world of queer and migration theory. Somehow this morning my body was just not up for watching the news! It was like subconsciously, I did not want to remind myself of those dark days after 9/11. As a brown, materially challenged, Queer, immigrant building a household with another brown-poor-Queer immigrant, surviving the days after 9/11 was nothing short than an act of tremendous of courage, and building collective resistance against an increasingly securitized state.

"Debanuj, wake up! the twin towers have fallen!" David’s voice yelled on the answering machine. Tired from a long night of canvassing in suburban Long Island, I lazily answered the phone, in complete disbelief. "How could it happen? We just saw them last night?" I cried. The first thing that flashed across my mind was "My green-card application is fucked!". Frantically I dialed work, asking how much was in my paycheck for the last two weeks. Because there was no way in hell, as a brown fag, I would canvass in Long Island after the forced castration of collective US consciousness. Only a few months ago several day-laborers were brutally bashed by racist white men in Long Island.

The days that followed were days of intense pain, confusion and desperation. Several of our Pakistani friends were attacked on the streets, about eight Queer and trans-gender South-Asian’s (including myself) were beaten up in New York City. Our household, went from a being a dual income household to a single income household. We ate one heavy meal a day, sometimes we would cook community meals in our house, and silently eat, with fear imprinted on our foreheads. Very soon these community gatherings became rife, places to exchange survival tips, notes on what to do if the FBI came knocking on your door, and, most of all, festive with cheap liquor, Salsa and Bhangra music. As we drank, and danced away our fears and pain, in our small but firm ways we announced to each other our zeal to fight and survive!

Several stories have been told about the brave firefighters, our nation’s heroes, and even of the domestic partners of gay bankers who died in the twin towers. Yet, very little is talked about the undocumented Bangladeshi cooks of Windows to the World, or the Mexican women janitors, whose babies were found by their neighbors days after 9/11 lying alone in their Queen’s apartment. Very, little is talked about a neurotic, diseased, intellectual and his sexy, smart Queer friend, who in spite of the fear, anger, pain and bitterness continued their attempts of community building with their meager income, at their uptown Manhattan residence.

Our bodies do not fit the defined parameters of nation-citizenship-sacrifice and war!

Our bodies lie at the intersections of poverty, queerness, shades of brown, black and yellow in this "land of the free and mighty".

Our bodies inhabit spaces that fall through the cracks of security-states and biometric regimes.

Inherent in our bodies, lie the strong, silent current that disrupts tropes of domination ever day!

Our Bodies, this body of mine bears history!

2 thoughts on “This Body Bears History! Notes on Surviving 9/11”