Renowned Gay writers and artists will gather on Saturday, November 15, to honor celebrated author Stuart Timmons who suffered a major stroke last January. Malcolm Boyd, Chris Freeman, Trebor Healey, Michael Kearns, Felice Picano, Derek Ringold, Terry Wolverton, and others will read and perform from 3 to 5 p.m. at the ONE National Gay & Lesbian Archives. The fundraiser target is $20,000 to help pay for much needed (and very expensive) medical support in Timmons' ongoing recovery.

Timmons wrote the biography of Gay movement founder Harry Hay, The Trouble with Harry Hay and most recently co-authored the best-selling history book, Gay L.A. In addition to his writing, Timmons is a longtime community organizer, active in ACT-UP LA, the Coors beer boycott, the labor movement through his recent work at the Los Angeles Alliance for a New Economy, and as former director of ONE, the world's largest LGBT library.

After complaining to a friend of troubling neurological symptoms, Stuart was taken to Kaiser Hospital in Los 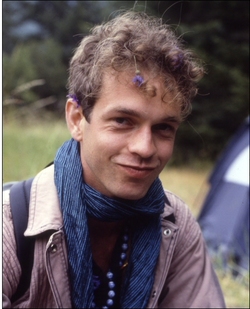 Angeles where the stroke was diagnosed and he received life-saving surgery. Stuart is 51 years old. Timmons, who has been unable to speak or move during the past eight months, has been under the careful watch of doctors, concerned family and friends. Recent improvements in his physical condition have been encouraging, says his sister, Gay Timmons, but his recovery will be a long one.

The benefit afternoon will raise funds to provide much-needed (and did we mention very expensive and not covered by insurance?) hours of physical therapy and other medical necessities beyond what routine insurance can allow. "The more additional hours of therapy Stuart receives, the sooner he can return to a functional life," says Gay. "The signs for recovery are good, but now is a critical time for the community to step up and lend its support."

Contributions can be made in person at the door or sent to:

The ONE National Gay & Lesbian Archives is located at 909 West Adams Blvd., near the University of Southern California campus in Los Angeles. Parking is available behind the Archives building, located three blocks west of Figueroa Ave. at Scarff St., as well as in the immediate neighborhood.

The event is being sponsored by the ONE Archives, Lambda Literary Foundation, Monette/Horwitz Trust, White Crane Institute and the Drk/rm photo lab, which will be contributing rare photographic prints. Other artwork will also be available for purchase to further assist in the fundraising effort.