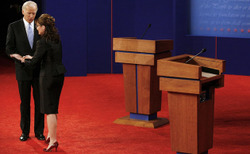 The news of last night’s Vice Presidential debate has fast faded into the oblivion. The House vote on the "rescue plan" for Wall Street and Man Street is today’s headline. While news of similar bank failures, and mergers all over Europe, and losses in the Asian market rage on cable news channels, it is important to contextualize the vice presidential debate.

First, both Governor Sarah Palin and Senator Joe Biden proved that they are prolific speakers. One stoic statesman, once single father and a small town law professor and the other a designer Japanese eyeglass sporting, dashing, young mother of five and a self proclaimed "Folksy-hockey mom".

Folksy!! if you have not caught this term being thrown around in the media lately, let me tell you this is the latest term deployed while fetishizing poor and working class white people. Gov. Palin presented herself as a Washington outsider, with fresh bold ideas. Yet the ideas she espouses are reminiscent of classical neo-conservatism, with a dash of all kinds of schizophrenia’s!

She claims to represent the interests of the working people, and wants the government to stay by the side and not on top of day-to-day business. However, in her critique of Wall Street, she professes more government oversight and reform. What exactly are these reforms? Is she opining a complete government non-interference with Wall Street or more Washington supervision? The decision is not clear. The marketing of Sarah Palin is essentially a way of appealing to white, working class voters, sending them a message that you can be dumb, i.e. "folksy," in line with giving breaks to big corporations, and in return be rewarded with feeling like you do matter. When the truth is massive laxness in oversight on Wall Street (a by-product of the less government theory) that has lead to severe corrosion of the credit market, impacting the low income student in trade schools, small businesses and working families in the worst possible ways.

"Folksy" is truly yet another way of fetishizing white working class, largely suburban and rural people, and a shameful attempt to hide ways to consolidate white, upper class privilege in the name of "every other family".

Joe Biden, on the other hand, had his facts, figures and personal life stories at the tip of his fingers. Though presenting a much saner version of future US foreign policies towards the middle-east and South Asia, he never really answered why he voted for the Iraq war in 2003. His appeal as a single father, statesman, champion of women’s rights and issues of concern in Africa and Eastern Europe was well-rounded and deserved. When asked about what kinds of rights should same sex partners be eligible for, he answered with similar rights as heterosexual couples, and made a distinction between faith-based marriage and civil/domestic partnerships.

Gov. Palin to the contrary of Biden claims she would not support any such arrangement if they seem to lead us on the track of Gay marriage! But was prompt to add a long diatribe about her "tolerance" for diversity, and that something as basic as hospital visitations and private contracts between individuals would never be curtailed. Here again the conservative schizophrenia around government institution to protect one kind of familial arrangement on one hand, and bestowing upon them the often shrinking economic privileges vs naming other arrangements as private and beyond the scope of government supported rights and benefits is so obvious.

Needless to say, as the debate was happening, a chain of emails regarding an HIV+ Trinidadian immigrant woman being detained at JFK airport flooded my inbox. It reminded me, while the humanity of US citizen LGBT folks were being debated on national television, a whole new class of in-humans (immigrants) has been created in the US, upon whose existence definitions of "legal" and "illegal" is being predicated.

Will Barack Obama and Joe Biden (if elected) remain committed to the "fairness" that Biden espoused last night? Will the hundreds and thousands of hard working, tax paying immigrants (painted as illegal monsters!), who have been detained and deported see justice? Will LGBT and HIV+ immigrants finally be able to legally adjust their status in this country? and most importantly will the kind of reckless financial dealings that we have seen in the last few years, be checked?

I challenge us all to ask these questions to both the campaigns, before hitting the polling booth on Nov4th!

Till then, gosh! darn! you betcha "folksy" is not cool!