“Coming Out” has many meanings and can happen more than once in a person’s life. In previous articles I wrote about “coming out” as a Gay man, a Jew, a bear and a nudist. Now I want to talk about my “coming out” into politics. Though I never served in public office I consider myself to be a political person, if we define politics as a citizen’s healthy concern for his society and the way that it is governed. My political views, like those of other people, were shaped by my upbringing, my environment, my education, my life experiences and by events that changed my life. Two events were particularly influential in determining my life and politics: the Cuban Revolution (1959) and the Gay, Lesbian, Bisexual and Transgender Movement (1969).
My political bent, unlike my thick dark hair (now greying), soft brown eyes, left-handed dexterity or homosexual orientation, was not inherited. But it was definitely shaped by my upbringing. My friend and fellow activist, Allen Young, once wrote about growing up as a “red diaper baby,” the son of Jewish-American Communists. My parents were the opposite: proudly conservative, fiercely anti-Communist,

Cuban exiles. Like most men and women of their generation, my parents experienced the Revolution as a disruptive force that destroyed everything they held dear and forced them to leave their home. Once settled in Miami (temporarily, they hoped) most Cuban exiles were firmly opposed to Communism and to anything that they thought led to it: socialism, progressivism, liberalism, homosexuality, etc. They saw the Democratic Party as hopelessly liberal and tainted by John F. Kennedy’s “betrayal” of the Cuban people after the Missile Crisis. The Republicans, on the other hand, seemed more willing to stand up to Castro and his henchmen, however ineffective their stand might be. For that reason, almost alone of all Hispanics in the U.S., Cuban-Americans vote overwhelmingly Republican.

Like other Cuban-Americans of my generation, I grew up in this conservative atmosphere. However, by the time I graduated from high school in 1972 I had developed a political bent of my own, one at odds with that of my parents or for that matter most people in my “hometown” of Little Havana. My political nonconformity can be attributed to several factors: my sexual orientation, which allowed me to question authority and the status quo; my natural curiosity, that encouraged me to go beyond my schooling to explore new ideas and personalities; and my own stubborn and rebellious personality. Whatever the causes, I was liberal where liberal wasn’t cool. I also realized, unlike my parents, that I was in the U.S. to stay. So on June 6, 1973 I became a U.S. Citizen, the first one in my family to do so. I also registered to vote that day.
Obviously, there was no political future for a liberal Democrat in Little Havana. In any case, by that time I had come to the conclusion that I was Gay, and that my sexual orientation trumped other issues as far as my politics were concerned. Many activists look back to a pivotal event in their lives that shook them out of their apathy and got them involved in the fight for GLBT rights and equality. In my opinion being openly gay in a homophobic society was in itself a political act; and my rights and freedoms as a gay man must not be taken for granted but fought for every day and in every way. For that reason, and in a time and place when most Gay men and Lesbian women were still in their closets, I refused to hide my identity. 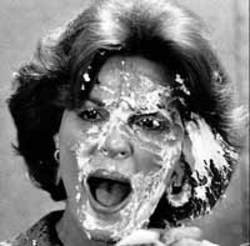 Being openly Gay in Miami in 1976 and 1977 was not easy, and it probably kept me from building a career or making a lot of money. But I did what I had to do and I think I am a better man for having done so.
I came out politically at an important time in our history, when Miami-Dade County first considered adding affectional or sexual orientation to its Human Rights Ordinance. The resulting campaign, which led to the repeal of the “Gay rights ordinance” by a 2 to 1 margin (June 7, 1977), did more than make singer Anita Bryant a symbol of religious bigotry. It also made people realize that there were homosexuals all around them, and that Jesse Monteagudo was one of them. Though I was not a polarizing figure like Bob Kunst, I was president of Latins for Human Rights, a vain but notable attempt to encourage Gay Hispanics to come out of their closets. As if that wasn’t enough, the day after the election my smiley face appeared on the pages of the now-defunct Miami News, wistfully embracing my then-partner. At a time when the most influential Gay group in Broward was fondly known as “Closet Clusters,” just being photographed was a radical act.
During the next few years (1977-1982) I graduated from Florida International University, moved to Broward County, and changed my job a few times. And I served on the boards of the Dade County Coalition for Human Rights and the Broward County Coalition for Human Rights. A new crop of gay activists emerged in those days, political realists who knew how to play the game: Tom Bradshaw, Brad Buchman, Karl Clark and Gary Steinsmith (all sadly gone) among others. They created the Dolphin Democratic Club in Broward County (1982) and made it the political force that it is today.  And while I was a member of the Dolphin Club from the beginning, I never served on the Board, nor did I ever seek public office.  A non-partisan, activist, “in your face” group like the now-defunct GUARD – Gays United to Attack Repression and Discrimination – was more my style.
But while I am not a politician in the traditional sense of the word, I remain political to this day. Instead of running for office I channeled my political energies into another direction, as a writer for the then-flourishing Gay and Lesbian press. In 1980 I began an opinion column, now  “Jesse’s Journal”, in The Weekly News (twn), for 29 years (1977-2006) South Florida’s gay community paper. Writing a column gives me the opportunity to express my political views in a medium that I am comfortable with.  And it’s good to know that people read my work, if only to complain about it. I took it as a compliment when certain people, including some who knew me from way back, wrote angry letters to the paper, calling me a radical, a socialist and a communist along the lines of Ted Kennedy, Jimmy Carter, Bill Clinton, Al Gore or John Kerry. When you’re compared to Ted Kennedy, you must be doing something right.
Jesse Monteagudo is a freelance writer and proud liberal who continues to disappoint his mother by not keeping his mouth shut.  Reach him at jessemonteagudo@aol.com.