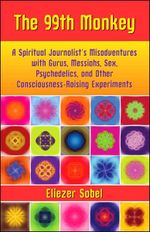 Many White Crane readers are, shall we say, veterans of the New Age. Some of us started in the 60s, some started in our 60s, but most of us, it's safe to say, have had some brush with "gurus, messiahs, sex, psychedelics, and other consciousness-raising experiments," to quote the subtitle of Eliezer Sobel's hilarious and insightful spiritual memoir, The 99th Monkey.

Sobel has done it all. As he says in the book's introduction, "I was massaged, shiatsu-ed, and Rolfed; took hundreds of consciousness workshops, human potential seminars, and self-improvement courses; sat with psychics, channels, and tarot readers; experienced Prima, Gestalt, Bioenergetics, Object Relations, generic talk therapies, and anti-depressants.  And that's the short list." In short, he writes, "I was desperately trying to cure myself of being me."

This odyssey, though perhaps longer than most, should sound familiar to all of us who have dabbled (or more than dabbled) in spirituality and personal growth work. Sobel is straight — though in emails with this reviewer he embraced the label of "queer heterosexual" — but his journey is just the kind of long, winding road to which those of us in the gay wisdom/gay spirit world can really relate.

It started, it seems, with a feeling of unsafety in childhood: Sobel's grandparents were holocaust survivors, and fear/antisemitism/enemies lurked behind every darkened door. And it ends, 307 pages later, with Sobel still as neurotic as ever, but, again like many of us spiritual seekers, a little more okay with being neurotic.

Along the way, there are hilarious encounters with gurus famous and obscure. Ram Dass has Sobel show him his penis when Sobel complains of feeling inadequate (Sobel "had no idea at the time that he… might have enjoyed having young men take their pants off for him"). He gets so raw during primal therapy that he cries when he reads Peanuts. (I do too, but only when Schroeder is in it.) He does the "Tush Push" at a sexuality workshop (you can probably figure that one out). And he does "get it" many times: during est training, at Esalen, even in a 30-second encounter with "the Godman," Adi Da.

The 99th Monkey is hilarious, and self-deprecating, but also sincere. It's not a parody of the spiritual search; Sobel is authentically moved, inspired, transformed, even if he resists it every step of the way. (The book's title comes from the 1958 paradigm shift that took place when a critical mass of Japanese monkeys learned a new way of eating potatoes. The 100th monkey is the tipping point; Sobel, as the 99th, is the one personally preventing the paradigm shift.)

And yes, it is a queer book, sexually speaking. At one point, Sobel tosses a metaphorical coin and says "Heads, I'll get married; Tails I'm gay." He is told by a medium that at the dawn of time, he was a Star Being "pushing for one androgynous human being" rather than sexual differentiation. And there is that Tush Push. But what's interesting about the way The 99th Monkey plays with sex is not that Sobel is ambiguously gay; it's that he's a straight man with a lot of gay men's problems. I felt, reading the book, that there might be real "straight allies" out there after all — as long as they're as crazy as Sobel is.

There's much more: bad mushroom trips, encounters with the Dalai Lama, nights at the tombs of mystics in Israel. But I'll leave that for you to discover. The end of the book finds Sobel again with Ram Dass, this time "sobbing, my heart weeping with a poignant joy… seeing, that in God's infinite garden, we are each a perfect flower, even me." Now that's a happy ending we can all agree about.