I got up at 5:30 this morning, posted the Gay Wisdom mailing to the internet, put on some pants and a shirt, a jacket and a hat, leashed Brewster and took him out for his morning business. It was still dark out, though the earliest light was visible on the far reaches of the horizon. 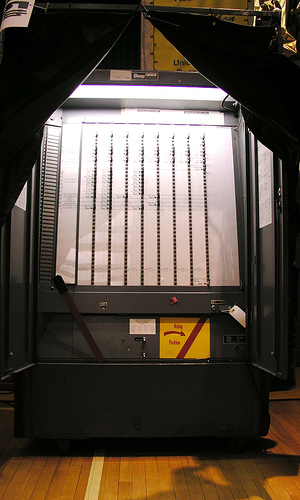 The first thing I noticed was the odd number of people out at this normally quiet time in my busy, noisy neighborhood, Prospect Heights, in the shadow of the Brooklyn Museum. Usually I might see a car in the morning, or an early delivery truck. But not people. This morning, I counted a dozen people, coming from different directions, but all heading in the same direction, the Elijah Stroud Middle School on the corner of Sterling and Classon Avenue. I rushed Brewster through his walk, took him back home and left him with my partner and, grabbing a cup of coffee and my paper, I dashed out the door, and out on to the street.

Even more people out there now. I walked across the street and down the one block to Stroud elementary, and turned the corner to see the line. I have voted in this neighborhood for the past seven years, and the longest line I've ever seen was one snaking out from the gymnasium where the booths are, to the front door, about 20 feet away.

This morning, the line stretched past that point, out through the cast iron gates, turned to the left, and went nearly halfway down the New York City block street to Washington Avenue. It was 6:00 a.m. There were hundreds of people already on line, waiting patiently to cast their vote.

There was definitely excitement in the air. And more African-Americans than I had ever seen on any election day before. And young people. My neighborhood is very Caribbean (the largest Caribbean Day Parade goes right down Eastern Parkway, two blocks from my apartment), and becoming "hip" so there is a huge influx of young people seeking low(er) rents.

You could hear people talking ("wow…look at the line!" "Can you imagine what it's going to be like later?") And everyone I looked at was smiling. Not as much as they were smiling when they came out of the voting booth. Then they were positively beaming…men, women, young, old. Everyone I saw coming out of the booth had this almost beatific grin on their face. Some people actually came out singing. They greeted one another. Joked. They had a spring in their step. It was beautiful…this was the place to be!

The line moved pretty fast. From the time I got on line, until the time I was waiting outside the voting book was precisely one hour. But the line was always moving. My district had two voting booths (like the one pictured…something like 513 moving parts!) but one of them was already broken. So, that slowed things down a bit. But start to finish, one hour, reading Dreams From My Father on my Kindle, listening to Mozart and Stan Getz.

It was the best line I have ever been on.