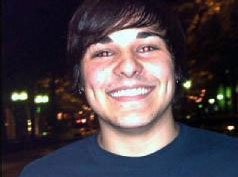 We don't get these kinds of requests very often, but this one seems to be a simple enough one with which to comply that we thought we would share it.

In May of 2007, Stephen Andrew Moller punched Sean Kennedy, a 20-year-old Gay man who lived in Greenville, SC, in the face so violently that Kennedy's brain separated from its stem; Kennedy died several hours later. Despite the unprovoked nature of the assault and the homophobic slurs that Moller made both before and after the murder, Moller was plea bargained down to involuntary manslaughter and given a suspended sentence of 3 years in prison.

Sean Kennedy was murdered because he was Gay. This crime happened in our own community and it strikes fear into the hearts of us all. Moreover, the injustice of this case was outrageous.

Sean's murderer could be out of prison on parole as early as next month, meaning that he will have served only 8 months since his sentencing. We must protest this injustice and ask the parole board to make Moller serve the remainder of his sentence. It is critical that they hear from as many people as possible.

Join us in supporting Sean Kennedy's family and Sean's Last Wish and consider writing a letter to the parole board asking them to deny Stephen Moller parole and make him serve out his sentence, which will end in September 2009. In your letter, please remind the board of the violent and unprovoked nature of Moller's offense and the pain and suffering it has caused in the lives of Sean Kennedy's family and friends. If you knew Sean or know his family personally, please include that information.

Also, please let Elke Kennedy know if you send a letter and if possible, send her a copy of the letter at elke@seanslastwish.org, so she can have them to take with her to the parole hearing.

It is important to to include Moller's full name and ID number:

Letters should be addressed and sent to:

Please forward to your contacts, friends and family.