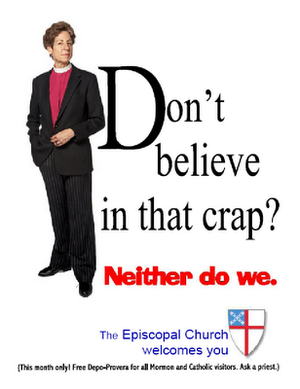 Once again, the courts have dealt a blow of constitutional reality to religious bigots.

Word from California has been, at best, mixed, lately. But yesterday, we got word from our friend Mark Thompson, confirmed today in the NY Times, that the California State Supreme Court ruled that three parishes that left the Episcopal Church over its ordination of Gay ministers cannot retain ownership of their buildings and property…no small loss. And it was a unnanimous decision. We can only imagine it's only a matter of time before this gets kicked up to the U.S. Supreme Court.

The full details are at the NY Times site, but the parishes are located in some high rent districts in Southern California: Newport Beach, Long Beach, and North Hollywood.

I guess the bigots are just going to have to move to some old abandoned drive-in.