One of the most common slurs aimed at Gay folk is the "crime against Nature" accusation…the idea that homosexuality doesn't occur "naturally." Now, of course, we all know that's a bunch of heteronormative bunkum…Gay penguins, Lesbian seagulls, Bonobos (known taxonomically as Pan paniscus, or the "diminutive Pan"), dolphins ("birds do it, bees do it, even educated fleas do it!")…all you have to do if you're looking for instances of homoeroticism in Nature is look for it and be willing to actually see it. 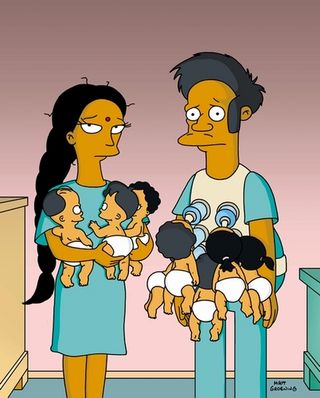 On the other hand, am I the only person in the room who is mildly disturbed by these stories of multiple births (eight at last count in California, to a woman who apparently already had six children…and they are questioning whether fertility drugs were involved. Well duh!…ya think!?) and, this morning, a 60 year old woman who gave birth. Now…I'm going to be 59 myself this year, and I can tell you, the idea of getting up for middle-of-the-night feedings, to say nothing of diapers, is the very last thing I would welcome. The story mentioned that this 60-year-old woman had turned to fertility drugs after decades of attempting to conceive… ahem… naturally. In my humble opinion, these aren't births…they're litters.

No one is supposed to question the aching desire of these women. Nevermind how self-centered and entitled it all is. My favorite part of all of these stories is how the mother in question always manages to see herself and her conception as something for which god needs to be involved and thanked, completely ignoring the fact that none of it would have happened without the science of in vitro fertilization. One wonders how many of these women who see their wombs as "miracle sites" would in the next breath condemn evolution. Or the women who, with multiple embryos crowding their otherwise unfertile wombs, decline what the doctors refer to as "selective reduction", i.e. selective abortions of some of the embryos for the health of the remaining embryos, citing "god's will," as though god had anything to do with the multiple embryos science placed in her. If god had anything to do with it, then perhaps the very idea that someone, after decades of infertility, might figure out the message that perhaps she isn't supposed to conceive.

And I have to wonder: did anyone bother to tell these self-absorbed "aching wombs" that, in the United States alone there are more than 129,000 children in foster care in need of a loving families and mothers?

And what doctor gave this woman fertility drugs? Where is the oversight? This woman is not married, already has 6 children, lives with her mother and her excuse for having fertility treatments – and therefore eight more children – is that she just wanted one more girl? She was lonely!!?? These are not Barbie Dolls, they're human beings. Babies. Yeah…that's the answer: Collect them all!

That's what I call "a crime against Nature."

And another question: How many of these multiple birth families end up needing public tax monies (paid by Gay people who are, in some states, forbidden to adopt) to manage their families?