Homage to Gore Vidal
If I had to be stranded on a desert island with only the works of one author, I would pick the works of 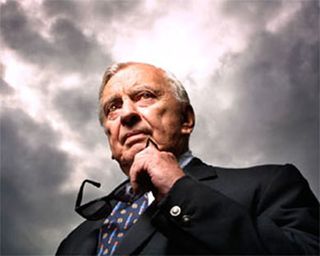 Gore Vidal. Brilliant, erudite, perceptive and sarcastic, Vidal is a one-man library. He is the author of twenty-three novels, five plays, two memoirs, numerous screenplays and short stories, and well over two hundred essays. By virtue of heredity, luck and talent, Vidal has witnessed almost a century of American political and social life. His most famous series of novels – Burr, Lincoln, 1876, Empire, Hollywood, Washington DC and The Golden Age – is a fictional history of the United States from the American Revolution to the recent past. A frustrated politician – Vidal ran for Congress in 1960 and the U.S. Senate in 1982, and lost both races – Vidal channeled his political genius into literary forms, chronicling the Decline and Fall of the American Empire in a series of perceptive essays that, as United States: Essays 1952-1992, won the 1993 National Book Award. Last year, Vidal’s best essays were collected in The Selected Essays of Gore Vidal, edited by his literary executor, Jay Parini (Doubleday; $27.50)

In addition to his contributions to historical fiction and political commentary, Gore Vidal has written some of the most important works of American literature dealing with Gay, Lesbian, bisexual or transgender people. Openly bisexual, Vidal rejects any attempt to sexually categorize himself or any others. His 1948 classic, The City and the Pillar, was one of the first mainstream American novels to deal with male homosexuality and bisexuality. Two decades later, Vidal’s stinging Hollywood satire, Myra Breckinridge, was one of the first novels ever written about a transsexual woman. Vidal also wrote a series of gay short stories, some of which appeared in his 1956 collection, A Thirsty Evil. Gay characters also appear in most of his historical novels.
I had the pleasure of seeing Gore Vidal in the flesh last November, when Vidal appeared at the Miami Book Fair International to promote his Selected Essays. Now 83, Vidal recently sold his beloved Italian palazzo, moved back to America and mourned the loss of his long-time partner, Howard Austen. Infirm, and barely able to walk, Vidal was nonetheless as brilliant as ever, like his 18th century French counterpart, Voltaire. An early and constant critic of President George W. Bush’s “war on terror” – an excuse to increase presidential powers and curtail civil liberties – Vidal welcomed the election of Barack Obama as our 44th Chief Executive: “The terrible time is over,”' he exulted. Vidal called Obama “an educated man, probably overqualified for the post” and hopes America takes Obama's message of change to heart.
But Obama should not get complacent, for Vidal is known for aiming his lethal pen at all politicians in the “United States of Amnesia,” regardless of political party. As he put it, “we have a political system which has been so crooked so long there's no rationalizing it. Everything is a lie and a cheat, and everybody is grabbing as much money as they can.” Vidal also predicted our dismal economic situation: “I was quite right, wasn't I?,” he said, with great satisfaction. “With the course we were set on, it was going to happen. You don't have to work for Goldman Sachs to think these things through.”
I sincerely hope that Vidal lives to a ripe old age, for our country needs writers like him, to criticize our politicians and inspire the rest of us. Like many of us, Vidal worries about the “dumbing of America.”  Americans, Vidal said, need to be “smarter people, better-read people, knowledgeable people. We wouldn't have had the Bush administration if people would read.” Those of us who read have gotten much out of Vidal’s wit and wisdom, and will continue to do so for a long time, desert island or not.
BRIEF NOTE: In a recent post about police harassment of Gays in New York City, I made short shrift of the New York City Anti-Violence Project (AVP), going so far as to leave out part of its name. The AVP, in fact, is one of our most vital organization, “dedicated to eliminating hate violence, sexual assault, stalking, and domestic violence in lesbian, gay, bisexual, transgender, queer, and HIV-affected communities through counseling, advocacy, organizing, and public education.” It provides free and confidential assistance to LGBTQH people in all five NYC boroughs, and works with the larger community to educate the public and reform government policies.  The AVP also tracks and documents anti-LGBTQH incidents and uses this information to educate our communities about safe dating, safe cruising, signs of abuse, and much more. For more information about the NYC Anti-Violence Project, visit www.avp.org.
Jesse Monteagudo is a freelance writer, Gay activist and book buff who lives with his partner in a suburb of Fort Lauderdale. Write him at jessemonteagudo@aol.com.

One thought on “Jesse’s Journal”