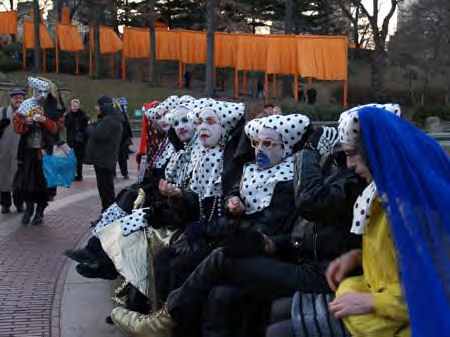 The Sisters of Perpetual Indulgence have been a colorful and important part of the LGBT community on both coasts for three decades. Now the divine theater of these highly effective and colorful provocateurs will be officially enshrined in a special exhibit at the San Francisco Public Library.

Entitled "Under a Full Moon: 30 Years of the Sisters of Perpetual Indulgence," the show traces the sacred and profane activities of these men in nun's habits. The display features photographs, internal records like their holy vows and "Pink Saturday Handbook," and artifacts like the habit of founding member Sister Missionary Position (now known as Sister Soami).

The Sisters began in 1979 with three men borrowed habits from retired nuns and ventured out into the Castro District on a moonlit eve. Since then, the group has grown to include 600 sisters in eight countries. They have raised money to fight AIDS with bingo games and other theme events, served as security guards at the Castro District's Halloween fete, combatted hate crimes and promoted safe sex. In 2007, they drew the ire of right-wing talk show hosts when two members in full drag received the Eucharist from Archbishop George Niederauer.

I love how, in this video, they are identified as "mocking" the Catholic Church (as if!). Watching it, it seems like they are nothing less than quite respectful to this observer. Their avowed mission: to "promote universal joy and expiate stigmatic guilt." Their motto: "go forth and sin some more."

Along the way, they have become an indelible part of San Francisco. The show runs March 20 through May 7 at the James C. Hormel Gay & Lesbian Center, Third Floor, Main Library.

And on Another Coast altogether, some interesting news involving Ugly Betty actor, Michael Urie, who

plays "Marc St. James," the catty, ambitious and hilarious assistant to Vanessa Williams delicious "Wilhemina Slater"…word in today's papers that he will star in The Tempermentals, a play by Jon Marans starting April 30 at the Barrow Group Studio Theater. The play is about the origins of the Mattachine Society, started by Harry Hay in 1950 when "tempermental" was a code word for Gay.

The Temperamentals tells the story of two men – the communist Harry Hay and the young Viennese refugee and designer Rudi Gernreich, weaving together the personal and the political to tell a sadly relatively unknown (to some) chapter in Gay history. It explores the deepening love between two complex men, while they build the first Gay rights organization in the United States pre Stonewall.

If I am not mistaken, we actually saw an early version of this play as part of a small theater festival featuring new work a couple of years ago. It was wonderful then. Maybe, like the rest of us, it's only gotten better with age?

That's all the word we have on it. Will report more when we know it!

And now…a little history courtesy of the Sisters: