In case no one noticed, or read their tweets lately, there’s a bit of a revolution going on now in Iran. Why should the LGBT community care?

As reference, imagine a United States of the late 80s when Pat Robertson was making a serious run for the president. Now, imagine a worst-case scenario where he’d actually won, and through a series of power grabs had declared the U.S. a Christian nation and that biblical law would take precedence over any silly old constitution or flawed laws that man might make here on earth. Then as the voice of God on earth (since after all God had gotten him elected) he starts making new laws based purely on his conservative take on literal biblical interpretations. It’s not just him making laws, it’s God guiding his hand on the pen. If you didn’t agree with him, then you obviously were a godless heathen, and had no place in the new world order. Soon women aren’t allowed to cut their hair, shellfish is banned, adultery is punishable by stoning, and gays and lesbians have to start going into hiding.

We dodged a bullet on that one, it wasn’t until much later, when in his opinion God was sending hurricanes to Florida to punish the gays – that we realized just what a total nut job Pat Robertson was, and he’s only gotten worse over the years. It’s scary to think though, that this man did mount a serious campaign, with serious backing. This in a nutshell is a version of what happened to Iraq in 1979 with the Islamic revolution. There was some serious corruption in Iran at the time, and some serious abuses of power. The revolution at the time seemed to many like a breath of fresh air, it seemed to be that someone with their “values” was representing them, and finally the average Joe was getting his day in the sun. However, as in many revolutions, it seems one corrupt regime was just swapped for another.

Iran, with the 1979 Islamic Revolution, became the touchstone for many of the radical Islamic movements that would follow. To consolidate power, it became oppressive, restrictive, tyrannical, and for many downright deadly. It would also lay the ground work for some of the worst atrocities against the global LGBT community seen this century.

Sharia law is not kind to the LGBT community. In theory, Sharia law lays interpretations of Allah’s will and implementation of law with a small group of highly educated, devout, highly-ethical, impartial and practical clerics. However, in recent years, these clerics, such as Grand Ayatollah Alia al Sistani in Iraq and the now in Iran, Ayatollah Ali Khamenei, have become increasingly self-serving, and increasingly more concerned about consolidating influence and staying in power. In Iraq there was the 2006 fatwa issued by Grand Ayatollah Ali al Sistani, that gays and lesbians should be killed in the most severe ways. In Iraq still, under the watch of the U.S., honor killing of homosexuals is still constitutionally protected as Sharia law. We all know how gays fare here in the U.S. 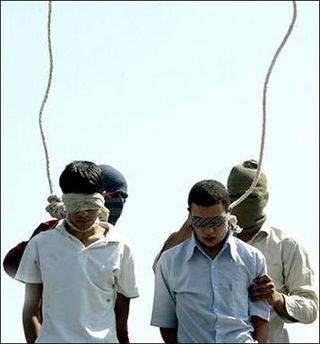 Then, in Iran, let’s not forget the public hanging of two gay teens in 2005. Persecution of LGBT people also leads to vast abuses in power. Don’t like someone? Someone becoming a political threat, one tribal group or another getting out of hand? – just throw around a few accusations that they’re gay or lesbian, they’re molesting boys, breaking up marriages, and people start to disappear. Oddly enough this all happens in a culture where homosexual acts are common, but there seems to be a huge line between using a man for sexual relief, and actually being “gay.”

Then there’s just the atmosphere created for LGBT people in this environment. We’ve seen first hand in this country how a strident right-wing government, with all it’s rhetoric, baiting, bashing, and hate speech, can lead to real dangerous conditions. Where it creates an atmosphere, where otherwise good people will look away and let violence and often murder go unheeded. It creates an atmosphere where people, even blame the victims for “flaming” or “just asking for it.” There’s an atmosphere where we have such ludicrous concepts like gay-panic defense pop up in court. Under militant Islamic rule, the LGBT community becomes the ultimate “other," much as in this country, where the issue of gay marriage is used by the right to play to the base. The LGBT community is demonized and blamed for weakening, even destroying, the very foundations and institutions that make us who we are as a nation.

This is not to say that if there was a change in regime in Iran that there would be a lavender revolution that would follow the green; however, we could hope that members of the LGBT community in Iran would at least not be hunted down and murdered. Obama has worked hard to remove the United States as a presence in Iranian politics. The hardliners there often pull out the threat of a boogie man U.S. to build base support, and divert attention from bread and butter, home grown issues like the economy and human rights. Sound familiar? Yes Iran hardline politicos use U.S. influence much like the right here in the U.S. uses gay marriage. All too often in Islamic countries gay and lesbians are not so much demonized on religious grounds (there is in fact a long history of tolerance going back centuries) they are more demonized as a symptom of western corruption. Remember Ahmadinejad’s UN speech: “There really are no gays in Iran!”

So why should the LGBT community care about what’s going on in Iran? First this truly does directly impact our community in the middle east. Then there’s the larger issue of just common decency. As members of the LGBT community we should be sensitized more than most to oppression and tyranny, we should always be out front in helping not just ourselves, but those who are ideologically part of our community, those seeking freedom and to live openly and democratically under a fair constitution. As members of the LGBT community here in the United States, even with our battles still to be fought, we must appreciate our relatively secure and open lives here in comparison to our community in the middle east. We just also think outside the box a bit, look outside of our country and yes, even outside of our community to support all of those fighting for a better life now in Iran.