The Trust has been presenting these awards for the past twelve years.

We're pleased and honored to be in such company.

Writer, Paul Monette and his lover, attorney Roger Horwitz, moved from Boston to Los Angeles in 1977. Both men were strongly associated with the LGBT activities of that city until their deaths. Horwitz succumbed to HIV-AIDS in 1896, which inspired Monette to write his groundbreaking memoir, Borrowed Time (1988). Monette went on to win the National Book Award for Becoming A Man: Half A Life Story (1992) and dedicated himself to the writing and activism for which he will remain known, capturing in poetry, prose and public speaking the hopes dreams and rage of a generation of gay men.

Before his death from HIV-AIDS in 1995, Monette established the Monette-Horwitz Trust to ensure the continued fruits of their activism as well as the memory of their loving partnership. The Monette-Horwitz Trust provides annual awards to people of diverse cultural backgrounds, genders and sexual orientations who hare, through their work, making significant contributions to eradicating homophobia.

A nice piece from the writer Augusten Burroughs.  Wish he'd named some of those forebears, but still take his point.  It's reminiscent of something Harry Hay used to say about not needing Gay "Pride" marches but Gay "Freedom" Days.  That it was crazy to be "proud" about being Gay.  It was like being "proud" for having blue eyes.  I think he said "blue eyes" as memory serves. 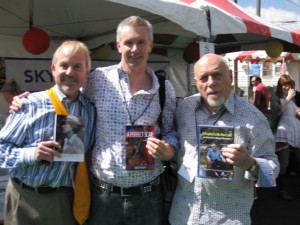