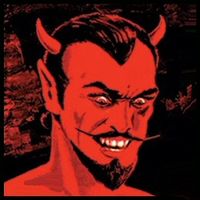 I know that you know that all press is good press, so I appreciate the
shout-out. And you make God look like a big mean bully who kicks people
when they are down, so I'm all over that action. But when you say that
Haiti has made a pact with me, it is totally humiliating. I may be evil
incarnate, but I'm no welcher.

The way you put it, making a deal with me
leaves folks desperate and impoverished. Sure, in the afterlife, but
when I strike bargains with people, they first get something here on
earth — glamor, beauty, talent, wealth, fame, glory, a golden fiddle.
Those Haitians have nothing, and I mean nothing. And 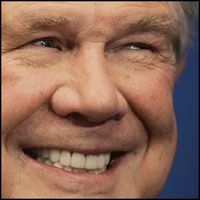 that was before
the earthquake.

Haven't you seen "Crossroads"?
Or "Damn Yankees"? If I had a thing going with Haiti, there'd be lots
of banks, skyscrapers, SUVs, exclusive night clubs, Botox — that kind
of thing. An 80 percent poverty rate is so not my style. Nothing
against it — I'm just saying: Not how I roll.

You're doing great work, Pat, and I don't want to clip
your wings — just, come on, you're making me look bad. And not the
good kind of bad.

Keep blaming God. That's working. But leave me out of it, please. Or we may need to renegotiate your own contract.

This was originally published in the Minneapolis Star Tribune in their Letters To the Editor section.  It was later revealed to have been written by a Lily Coyle of Minneapolis.

You can thank Jeff Whitty (of Avenue Q) for this bit o' truth.

Funny and sweet in a way.

Well, Fred Phelps, homophobic knuckle-dragger (wait, that's not really fair to knuckledraggers is it?) has made a nice video in celebration of LGBT Pride month.  His enunciation is perfect.

Actually, it's from the good folks at Good As You.

Pull out your Bibles if ya' got'em