I have never been to Dallas, Texas, a city that I long associated with the Kennedy Assassination and J. R. Ewing. Unlike Austin or even Houston, Dallas is thought to be a very red city within a very red state.  Wrong! No less an authority than Jason Dottley, star of the LOGO TV series Sordid Lives, lists the city of Dallas as # 2 in his list of “the Gayest Places Down South.”
“If West Hollywood is the Gay Mecca of the West, Palm Springs the Gay Mecca of the desert, and South Beach the Gay Mecca of all coastal cities, then Dallas must be the Gay Mecca of the South…For a city to be loved by me, it must be able to provide the best-of-the-best in five key areas: Dining, shopping, accommodations, entertainment and culture,” all of which Dallas has aplenty. Only one Southern venue beat Dallas in Dottley’s list, and that place is in Dallas itself: The Rose Room, a show bar at the ever-popular (or so I’m told) Station 4, which, Dottley tells us, “is home to nightly drag shows that will blow your socks off!”

Dottley’s enthusiasm is seconded by gaycities.com, according to which Dallas is no less than “Texas’s Biggest Gay Community.” “Dallas has one of the largest Gay populations in the US and is home to the largest GLBT church: The Cathedral of Hope. Gay Dallas is primarily centered around the Oak Lawn neighborhood with bars, restaurants, and stores found throughout Cedar Springs Rd and Oak Lawn Avenue. The intersection of Throckmorton and Cedar Springs has been called the ‘crossroads’ of Oak Lawn and is the home to a bunch of Gay and Lesbian Bars within walking distance.  Being a big city, there is a wide variety of people and scenes, so you are sure to find what you seek.”
Eddie Sanchez, writing about Dallas in the Gay Guide, agrees: “The US’s ninth-largest city, Dallas is 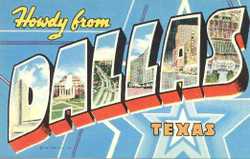 cosmopolitan and beautiful, with world-class architecture, a booming arts district (soon to be the country’s largest), and, like all of Gay Texas, a sense of duty when it comes to giving back to their community. What truly amazed me is how inclusive Gays are in Dallas. Sure, there are Gay bars and Lesbian bars and Hispanic bars, but people feel free and comfortable going from one to the next. Dallas’s Gay life is concentrated mainly in the Oak Lawn area with bars and clubs catering to varied Gay tastes, along with stores and restaurants.” As befits a city that’s smack in the buckle of the Bible Belt, Dallas is home to the world’s largest “Gay church,” the Cathedral of Hope, which used to be a Metropolitan Community Church but is now affiliated with the United Church of Christ. Dallas is also home to the world’s most famous “men’s chorus” (it denies being a “Gay chorus,” though most of its members are), the Turtle Creek Chorale.
Though Texas is one of most reliably “red” states,” at least during presidential elections, it is not as extremely conservative as I used to think, especially in its major cities: Dallas, Austin and Houston. In this matter the Lone Star State is not alone. There are many pink spots in the red South, including Asheville, North Carolina; Atlanta, Georgia; New Orleans, Louisiana; and half a dozen municipalities in my own state of Florida. Though I have never been to Dallas (as I said before), I have visited most of those cities and, honestly, I’d feel safer there than I would in some  rural areas in California or Massachusetts. Like their sisters and brothers in Dallas, Texas, the women and men who live in those cities have made the best of their lives in spite of the existence of some of the most homophobic state governments. In short, the GLBT communities of the urban South have taken their lemons and made a nice Lemoncello liqueur out of it.

On the other hand, there are still places in the South that seem to be homophobic through and through.  One of those, with apologies to those GLBT people who live in the Palmetto State, is South Carolina. Recently Amro Worldwide, a Gay travel agency, ran a series of ads in London subways that promoted Gay tourism in the United States. According to the ads, Atlanta, Boston, Las Vegas, New Orleans, Washington D.C. and South Carolina are “so Gay.”  Though officials in the five cities appreciated and paid for their ads, South Carolina state officials went into a tizzy at the idea that anyone would actually think that South Carolina is “so Gay.”  Republican Governor Mark Sanford called the posters “inappropriate,” and Republican State Senator David Thomas demanded an audit of the state’s advertising budget: “South Carolinians will be irate when they learn their hard earned tax dollars are being spent to advertise our state as ‘so Gay,’” huffed Thomas, in a statement. The state refused to pay for the ad and the Parks, Recreation and Tourism Department employee who approved of it resigned.
South Carolina politicians need not worry.  After this hoopla made the news around the world, there is no one left who still thinks the Palmetto State is “so Gay.” But once again the GLBT community was able to make a tasty lemonade out of a sour lemon. The South Carolina Gay and Lesbian Pride Movement, which paid for the ad after their state government refused to do so, has adopted its discredited slogan for this year’s Pride events. On September 20, “South Carolina Will Be So Gay” when the GLBT community celebrates its pride in the state capital of Columbia.
Jesse Monteagudo, a Florida-based freelance writer and Gay American, is celebrating his 30th year writing for the GLBT press. Reach him at jessemonteagudo@aol.com.

One thought on “Jesse’s Journal – the GLBT South, from Red to Pink”