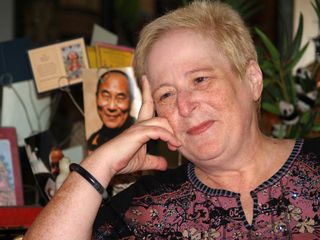 Is that a lovely face or what?…

Eve Kosofsky Sedgwick was an American theorist in the fields of gender studies, queer theory (queer studies) and critical theory, which mainly means she was concerned with how many queer angels were dancing on the heads of academic pins. Influenced by Michel Foucault, Judith Butler, feminism, psychoanalysis and deconstruction, her work reflected an abiding interest in a wide range of issues and topics including something called queer "performativity"…whatever the hell that is…and performance; experimental critical writing; the works of Marcel Proust; artists' books; Buddhism and pedagogy. Academic polemic gobble-de-gook aside…she was a friend to the LGBTQ community.

Surprising to some, she was married for 40 years to her husband, Hal Sedgwick, a CUNY professor of visual perception (optometry), but apparently only saw him on weekends. She would also prefer it to be reported in that manner, i.e. she was married to a man, as opposed to assigning her the "straight" or "hetero/homo" categorizations (a too conveniently neat division rejected by Sedgwick.)

Sedgwick’s books, including “Between Men” and “Epistemology of the Closet,” were on the shelves of most of the graduate students and comp-lit survivors, Gay and non-Gay, queer and non-queer, back in the 1990s. She virtually invented the field, or at least brought it to new heights. My personal favorite was an essay entitled How To Bring Your Kids Up Gay: The War on Effeminate Boys. If that was all she ever wrote she'd be worthy of laurels, from the aeries of the academe and the mundane streets alike.

Sedgwick’s radical challenge to heteronormative ways of reading and living may seem quaint (if that’s the word) in a time when people are celebrating same-sex weddings in Iowa and the White House Easter egg hunt conspicuously includes Gay and Lesbian families. Perhaps the misty future evoked in Pace University professor of English and women's studies, Karla Jay’s review of “Tendencies” — one where Sedgwick would be photographed shaving fellow queer-studies scholar Terry Castle on the cover of Time magazine, à la Cindy Crawford and K. D. Lang — isn’t quite here.

But alas, Eve Kosofsky Sedgwick, one of the foundational non-Gay allies, won't be around to see that future. She died April 12 of breast cancer. She was 58.

Our sincere condolences to her family and friends. In an age of anti-intellectualism and religious mythopoesis run amok, we need all the rational, intelligent voices we can find.