I think
as I please

And this gives me pleasure.

This right I must treasure.

My thoughts will not cater

To duke or dictator,

No man can deny —

As emotionally satisfying as it is to hear that the British Home Secretary has banned San Francisco radio shock jock Michael Savage (ne Michael A. Weiner) and the despicable Fred Phelps and his family from entry into Great Britain, along with various and sundry mad Muslim imams, Egyptian clerics and Russian skinheads…it is, alas, the most wrong-headed ham-fisted response, to say nothing of an appalling lack of imagination. 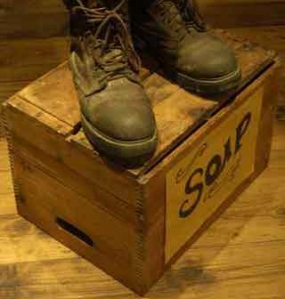 Simply put: the proper answer to abuse of free speech is not the stifling of speech, but rather more speech.
That is to say: Let idiots be heard. Let their rantings be viewed in the cleansing light of day. Ugly speech, like cockroaches, can't take the exposure to light.
Are we really so afraid of one another that we must repudiate our own values in the defence of those same values? Are we so afraid that they will gain greater audiences that reason will be lost (Japanese internment camps, the House Un-American Activities Committee and the Defense of Marriage radicals notwithstanding)?
The time to defend core values, essential rights is not when it's easy, but when it's difficult.
The world has been presented with a teaching moment in which the
argument for free thought — that die gedanken sind frei ("thoughts are
free") that the Nazis and every other absolutist dictatorship have
excelled in crushing — has not been advanced by those who know better. The easy way out is not the answer. It's convenient to simply stifle ugly speech, but it also serves to elevate its standing.
As a result,
a world sorely in need of a crash course in the efficacy of free debate
received nothing of the

sort from the British Home Office. Instead, the lesson has been that the suppression
of ideas is valid, as long as the suppressors are convinced and self-assured that they are "more moral," of "higher character" and in
the right.
As usual, it helps to remember Mark Twain: "Whenever you find that you are on the side of the majority, it's time to pause and reflect."
And you also have to think, when will my speech be deemed "offensive"?
When will they come for me?
* with thanks to Robert Scheer