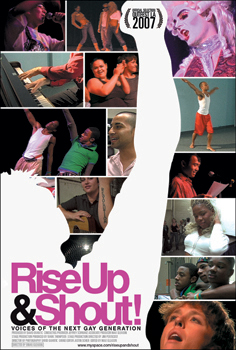 Got some good news in the morning email (almost called it "the post" which has a whole new meaning now) from psychotherapist and filmmaker, Brian Gleason, who works so hard in Los Angeles.

Some of you may be familiar with the Rise Up & Shout! project with which White Crane has been associated. It started in Los Angeles, with people like Brian, Malcolm Boyd, Don Kilhefner, Mark Thompson (I'm leaving out many, may other names of people…this kind of thing takes dozens of people…just don't have them in front of me as I write. I'll find them and include them later, promise) working with young GLBT people in L.A. to produce a talent show showcasing their various and sundry talents.

More importantly, it offered young GLBT people a chance to come in contact with elder GLBT people and let the intergenerational transfer of wisdom and experience mingle with the exuberance and freshness of youth. The first Rise Up & Shout, was a live stage production at the Barnsdall Park theater, directed by award-winning Broadway director, Jim Pentacost, and benefited White Crane, among others. And it was filmed by Brian Gleason.

That film will now receive the wider audience it deserves when it is aired on the Sundance Channel, later this month. The schedule is:

This is MUST SEE TELEVISION folks! Stirring, inspiring, touching. Worth getting cable for, even.

Check your local listings, as they say, for airtimes in your area.

BUT DON'T MISS THIS WONDERFUL FILM.

2 thoughts on “Rise Up and Shout!”