As an event and as a symbol, the Stonewall Riots of June 27-29 1969 continues to shape our lives.  Forty years later, a gay, lesbian, bisexual and transgender generation that was not even born in 1969 looks back fondly at “the Stonewall girls” as role models for GLBT activism and resistance. Even so, there are many young people today who do not know what “Stonewall” was, or what is represents, or why so many of our institutions and organizations are named after it. 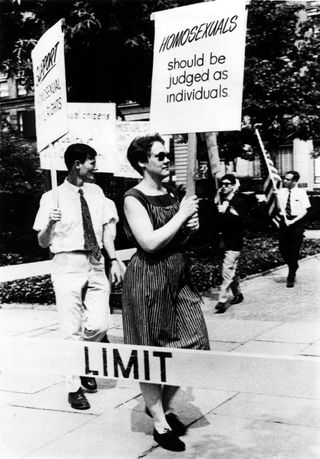 When “Stonewall” took place, I lived in Miami. I was sixteen years old, in high school and uncertain about my future. It wasn’t until I graduated from high school in 1972 that I learned about the events that shook Greenwich Village three years before.  By then the event that Martin Duberman (in his 1993 study Stonewall) called “the emblematic event in modern lesbian and gay history,” had already become a symbol of pride and resistance. The late Donn Teal, whose Gay Militants (1971) included the best account of the Riots prior to the one in David Carter’s Stonewall (2004), wrote that Stonewall “jolted awake . . . an only half-remembered outrage against straight society’s bigotries in those older, generally conservative ‘Boys in the Band’ who had been out of town on the weekend of the 27th-28th-29th, tanning their thighs at Cherry Grove and the Hamptons. And, as a slur, it posed a challenge to and goal for those younger . . . gays who’d had to make do with Greenwich Village and who’d seen [the] action.  It may have created the gay liberation movement.”
Though Stonewall inspired a generation of young New Yorkers (and others), its effect on the rest of us was more symbolic than real. After all, Stonewall was not the beginning of queer liberation. The Riots came after almost two decades of Mattachine Society and ONE and Daughters of Bilitis and Tangents and Janus Society and Society for Individual Rights and West Side Discussion Group; of demonstrations in Philadelphia and  Washington, D.C.; and of riots in Los Angeles, San Francisco, Chicago and elsewhere. It was the much-maligned Mattachine Society that got New York City to repeal its law against serving liquor to homosexuals in 1966, three years before Stonewall. (The NYPD continued to raid gay bars after the Riots, as it continues to do so today, though not because of the bar patrons’ sexual orientation.) Historian John Loughery was right when, in The Other Side of Silence, he pointed out that Stonewall was only the climax of a “maelstrom” year of gay resistance and activism.
New York City is the capital of America’s communications industry, and anything that happens there gets blown out of proportion. Though the New York media — especially the Village Voice, which had an office down the street from the Stonewall Inn – covered the Riots in their own unique ways, out of town papers largely ignored the event. And I was not the only gay person who lived through 1969 in blissful ignorance of Stonewall.  In fact, most gays at the time were not aware of the Riots till they became a symbol. For most lesbians, Stonewall made less of an impact on their lives than the feminist movement, then in its heyday. To this day there is still doubt as to what role lesbians played in the Stonewall Riots, or even if there were lesbians at the Stonewall Inn. 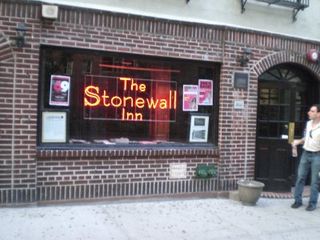 Like any symbolic event, the truth about Stonewall lies hidden in myth and legend. To this day, the Uprising has been attributed to a variety of causes, from the full moon to Judy Garland’s death (her funeral was on the morning before the Riots). Even the names and number of Rioters are in dispute: for example, the transgender activist Sylvia Rivera, who played a mayor role in Duberman’s Stonewall, is absent from Carter’s Stonewall. None of the Rioters – Rivera, Marsha P. Johnson, Jackie Hormona, Zazu Nova or Jim Fouratt, just to name a few – achieved the mythic status given Diego Viñales, the Argentine student who was impaled on a fence while trying to escape the cops in the aftermath of a police raid on the Snake Pit, another Village bar (March 8, 1970). The Stonewall Riots were largely a group effort; and history has kept it that way.
Having said all that, one must give Stonewall credit where credit is due. Taking place in 1969, Stonewall was the culmination of a decade of political activism and resistance. Some Rioters were veterans of the 60s counterculture and/or the civil rights, antiwar, feminist or youth movements, and used their experiences to help create a new, more radical gay liberation movement. New York activists, living at the hub of American business and culture, used their privileged positions to launch a national movement.  For much of the seventies — until the rise of Harvey Milk, himself a New Yorker who moved to San Francisco — New York activists led most of the groups that we joined (or its local chapters) and published most of the books that we read.
All in all, the Stonewall Riot’s greatest achievement was their impact on the hearts and minds of several generations of gay, lesbian, bisexual and transgender people. Though many heterosexuals remained firmly antigay, most of us who are G, L, B or T learned to accept and celebrate who we are. Thus it is significant that the anniversary of Stonewall has become the date of most annual GLBT Pride celebrations, not only in New York City but around the world. The late poet Allen Ginsberg, one of the fathers of our movement, saw the significance of Stonewall when he visited the site of the Riots soon after the first night: “Gay power!  Isn’t that great! . . . We’re one of the largest minorities in the country – 10 per cent, you know.  It’s about time we did something to assert ourselves.”
Jesse Monteagudo is a freelance writer and gay activist who lives in South Florida with his life partner.  Write him at jessemonteagudo@aol.com.