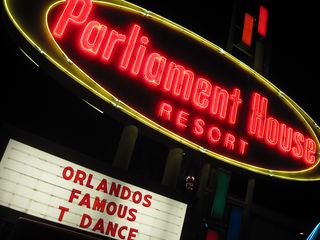 I first stayed at the Parliament House in Orlando in the summer of 1976, just a year after Bill Miller and Michael Hodges purchased the Abbey, a rundown motel at 410 North Orange Blossom Trail, and turned it into Florida’s premier gay resort. If I recall correctly, the rooms were rather seedy, certainly in comparison to the big hotel chains that began to take over Orlando in the wake of Walt Disney World. But, if the Parliament House was a dump, it was our dump. It hosted a wild pool party every day, the five bars and a disco catered to every segment of our community, and the Playhouse Theater presented a series of memorable shows, hosted by the immortal “Miss P” (Paul Wegman). Most notorious of all was “balcony bingo”: a never-ending parade of men of every age, color and lifestyle who cruised their way around the P-House, even (especially) after the bars closed. Those were the days.

The last time I visited the Parliament House was in the summer of 2009. The rooms were a bit run-down, and “balcony bingo” was not what it used to be. (Neither was I: This time, I went with my partner of over 24

years.) But the pool parties were still hot; the bars and disco still attracted crowds; and the fierce Darcel Stevens hosted fabu drag shows at the Footlight Theater and Cabaret where Miss P once reigned supreme.

A lot has happened to “La Casa del Parliamento” (to quote Miss P) during the 35 years of its gay existence. Both Miller and Hodges died from AIDS-complications–Miller in 1987 and Hodges in 1992–and the P-House was inherited by Hodges’s clueless relatives. The place floundered in increased decay until 1999, when it was purchased by the husband and wife team of Don Granatstein and Susan Unger. The new owners gave the P-House some much-needed renovations and the place resumed its place as Orlando’s de facto community center. Unfortunately, Granatstein and Unger made some unwise business decisions, like trying to start a time-share resort next door. And while the Parliament House didn’t change much, the community around it did. Gay tourists no longer had to stay in the P-House in order to be gay; as Orlando’s theme parks and world class hotels began to court the lavender dollar. The Granatsteins, a straight couple, frowned upon “balcony bingo,” though AIDS and the aging of Orlando’s gay population were also responsible for the decline of that time-honored tradition.

The current recession, which struck hard at the disposable incomes of so many of us, was not kind to the Parliament House. This venerable gay landmark is now facing a foreclosure action filed by its creditors.  According to the Orlando Sentinel, the Houston-based Southwest Guaranty Ltd. and Compass Bank of Atlanta initiated foreclosure actions over a $7.5 million mortgage that matured at the end of 2009.  The P-House will be taken over by a court-appointed receiver, who will continue regular operations under a court order. Don Granatstein told the Sentinel that he didn’t have the money to repay the note when it came due. However, he continues to hold the liquor license and plans to continue to operate the P-House, even under a receiver. “Am I happy with this? That’s a big no,” Granatstein told the Sentinel. “But I’m stuck with whatever happens, and we will be open 100 percent.”

As a gay man with an interest in LGBT history, I believe there are certain places that need to be preserved as community landmarks. One of them was New York City’s Stonewall Inn, which went through a series of changes over the years before finally resurfacing anew as a gay bar. For LGBT Floridians, Orlando’s Parliament House is a community landmark that served our community well for 35 years, affecting the lives of several generations of lesbians, gay men, bisexuals and transgender people almost as much as the Stonewall Inn did. It would be worse than tragic if the P-House goes under. For all its faults, the Parliament House was and is Florida’s “gay kingdom;” a queer oasis in the middle of the Bible Belt that was always there to serve our ever-changing community. I pray that “La Case del Parliamento” will survive this current crisis, and continue to serve and thrill and please us for many years to come.

Jesse Monteagudo (jessemonteagudo@aol.com) is a South-Florida-based gay activist and freelance writer.   Monteagudo wishes to thank historian James T. Sears and the GLBT History Museum of Central Florida (www.gayorlandohistory.com) for useful information and long-forgotten facts about the history of the Parliament House.