The Fire in Moonlight: Stories from the Radical Faeries
On Labor Day Weekend, 1979, 200 men gathered in the Arizona desert for the first Spiritual Conference for Radical Faeries. Called forth by Harry Hay (of Mattachine Society fame), Hay’s partner John Burnside, Don Kilhefner and Mitch Walker, this first of many Gatherings created a development that spread around the world and combined elements of gay liberation, feminism, environmentalism, new age spirituality and the counter-culture. Thousands of gay and Bi men (later joined by a few women) met in out of the way, rural Gatherings and Sanctuaries, creating a very loose network that defied the LGBT community’s tendency toward assimilation and institutionalism. Creative spirits like Will Roscoe, James Broughton, Andrew Ramer, Toby Johnson, Dan Nicoletta and Charlie Murphy became part of this sub-culture. It was Hay who coined the term Radical Faeries: both Radical (as to the root) and Faerie having to do with gays’ spiritual and cultural traditions rather than "radical" politics.
Among the 200 men who attended that first Faerie Gathering was author Mark Thompson. As Thompson remembers, the Gathering "was definitely a turning point in the burgeoning gay men’s spirituality movement. In some ways, I felt that gathering in the Arizona desert was as historically important as the Stonewall riots had been a decade before. Both events signaled a significant refocusing of values and vision, helping to create a new leap forward in gay culture-making. I attended many Gatherings – mainly in the Western United States – for the next 20 years." 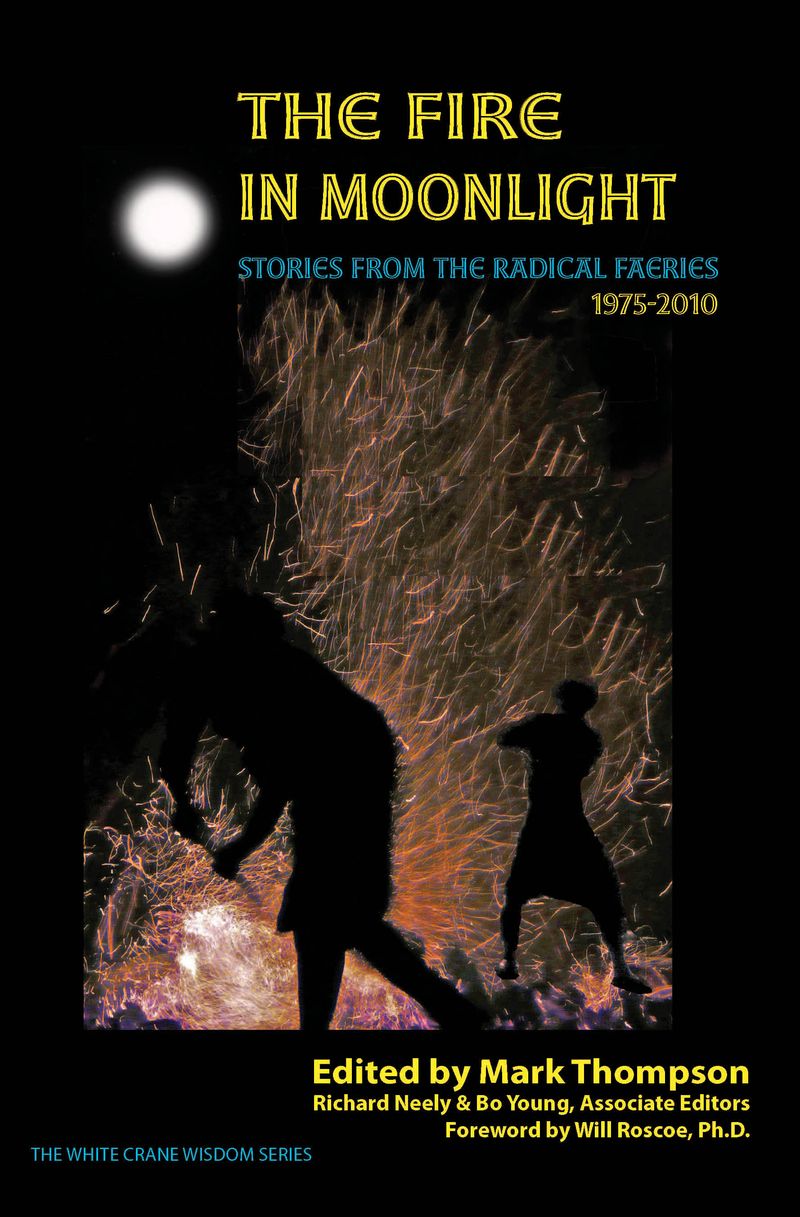 More than thirty years after attending that first Gathering, Thompson, along with Associate Editors Richard Neely (Osiris) and Bo Young, have assembled the first anthology by and about the Faeries. The Fire In Moonlight: Stories from the Radical Faeries, is published by White Crane Books / Lethe Press as part of the White Crane Wisdom Series ($25). "Since their sudden inception on a remote site in the American Southwest in 1979, the Faeries have grown like some exotic species of flora around the world," Thompson wrote in his "Introduction." "This book of many voices continues that early call – a call for freedom of mind, body and spirit from the petty, awful tyrannies of those who have tried every means to destroy us. It is about how being a Radical Faerie has changed a life." Among the contributors are Will Roscoe, Franklin Abbott and Trebor Healy.
Bo Young, publisher of White Crane Books, and Associate Editor of The Fire In Moonlight, began his involvement with the Radical Faeries in 1990, when he first visited the Short Mountain Sanctuary in Tennessee. As Young is quick to point out, "the organizing principle of the Faeries is consensus and the Faerie Circle . . . no leaders. Everyone is ‘equidistant’ from the center. No one person is out in front. . While the Radical Faeries are identified most often as a ‘movement’ it isn’t something you join. It’s a state of mind. If you say you are a Faerie, you are a Faerie. There are Faeries who are into drag and organic farming and wild fermentation and there are Faeries who are theatrical and there are Faeries who are living communally and there are Faeries that are eremitic. There are rural Faeries and there are urban Faeries."
In The Fire in Moonlight, Faeries past and present share in their Faerie experience. According to Jerry Berbiar (Jerry the Faerie), "the Radical Faeries were founded for gay men. The Gatherings were places where gay men could individually recreate themselves, create community, explore faggot essence and create their own culture, free from the dominant all-encompassing hetero viewpoint." "At the heart of the Radical Faeries is a recognition of and exploration into gay men’s souls: our unique way of viewing, experiencing and being in the world," Joey Cain wrote. "I found myself in environments where my very sexuality, my embrace of myself as male and female, my determination that my sexual nature was both natural and magical, were honored and explored," recalled "EuroFaerie" Marco Shokti. "For a freaky little queer boy like me the Radical Faeries were the family I hardly dared to dream might exist," declared Pete Sturman, AKA Mockingbird and Pistol Pete. "The Faeries provided me with a safe environment to try all sorts of different things. I could split wood in high heels, bake bread in my underwear or run around covered in mud. I could laugh like a hyena or take a day of silence. They helped inspire me to become a musician and songwriter, a loud and proud queen troubadour."

One of the most interesting parts of The Fire in Moonlight is the book’s "Faerie Glossary." According to Young (at left in photo), "a shared, unique language is one of the defining elements of ‘culture.’ The Faeries have a very definite and unique use of language and one of the chief motivations of the various traditions such as Sanctuaries is a ‘time out of time’ period in which the gay individual removes him (or her) self from the dominant culture and literally engage in ‘coming to terms’ with who s/he is." Hay challenged the Faeries to self-define, from which emerged a vocabulary which the editors believe required a Glossary. Many Faeries have taken "Faerie names;" spiritual or ecologically-inspired names in contrast to their "mundane, everyday names."
The Fire in Moonlight presents a mostly-positive view of the Radical Faeries. But there are dissenting views. "Improbable Faerie" Artwit, who was active with the San Francisco Faeries during the 1980’s, is critical of a subculture which, like other gay tribes, favors the young and beautiful: "I have no desire to be a Faerie Mormon and make breakfast while the pretty ones sleep in and fuck," he said. Young admits that "one of the challenges we had was finding an African-American contributor. The Faeries are like any other part of this American society and suffers from the inherent racism of the culture. But that said, it is one of the few communities of which I am aware that actually attempts to address that." In short, "The Fire in Moonlight is not meant in any way to be a hagiography of the Radical Faerie movement."
Artwit is in the minority. As Thompson (in photo at right) put it, "once a Radical Faerie, always a Radical Faerie." "The 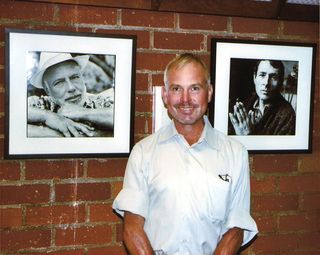 Faeries are by no means a perfectly evolved group," Thompson admits, "but it definitely represents a quantum step in healing gay male relationships and community practice. The Radical Faeries may appear as a rather funky, insignificant tribe of social outcasts, but I have to state here for the record that nowhere have I encountered more intelligent, creative and beautifully self-aware gays in one place than at a Faerie Gathering. A Gathering is the antithesis of a typical gay ghetto environment. It is an intentional community – a destination on the inner journey, not some angry place of refuge. There is a lot of joy that comes from being a Radical Faerie."
"The strongest thing about the Faeries," Young notes, "is their commitment to community and their general awareness of and respect for history and tradition. Another strength is the creation of and maintenance of the Faerie Sanctuaries in their various manifestations," many of which are listed in the "Radical Faerie Resource Directory" found at the back of The Fire in Moonlight. On the other hand, Young admits that the Faeries’ "generally perceived flamboyance tends to scare people away."  The Radical Faeries, Thompson says, "claim no particular leaders (we say we are ‘leader-full’) so there is not a problem of domineering egos holding others in thrall. People like that quickly get invited elsewhere. The reverse of this is that sometimes chaos ensues and the group experience can rapidly devolve into incoherent confusion. Over the years, the Faeries have learned how to walk better in balance between these polarities."
"The Faeries," Thompson continues, "have a very significant role in the greater understanding of what I would call our core gay values. Because we are living so in the moment, the archetypal motifs of gay psyche are more keenly felt and expressed. This is one crowd that is not going to be assimilated into mainstream mythology, which is still a narrative of heterosexual dominance. Faeries are shape-shifters, makers of ritual and beauty, natural teachers, healers and soul guides. We walk between the worlds, the seen and unseen, and between the genders. It represents a more authentic vision of who we gay men really are inside." "For myself," Young adds, "the chief asset of most Faeries I know is that they understand a history of same-sex people and tend to see themselves as connected to that history. There are so many other aspects of what I think of more as a culture than as a ‘movement’ . . . the attraction to the land, the care of the land, the rejection of consumerist culture, the sense of humor. It is one of the ancient archetypes of same-sex people to be jesters, culture carriers, interpreters and teachers. The Radical Faeries are all of these. These have always been incredibly important to any vital society . . . and they always will be."