No less than Vito Russo himself, speaking with the utterly charming Barbara Gittings and a dashing Harry Hay.

If you don't already watch Modern Family (as good as Glee!) this should encourage you to tune it. (And Alec…I think you ought to give Jesse and shot.)

WE can (and should) debate whether or not Marriage Equality is a fight worth fighting for or not. The assimilation of gay folk into an “institution” of such questionable history and stability has never really been talked about in a larger venue, as it needs to be.

But this video breaks it down in the simplest matter of equality. And if one should, or would, choose to be married, then, dammit, one ought to be entitled to all the same rights and responsibilities as the next person.

Bill Bowersock was with his beloved Harvey Frand for 32 years. Both paid into the Social Security system over that time and, in their retirement planning, they counted on both checks to get them through those later years. When Harvey passed away, Bill was not entitled to any of Harvey’s benefits, benefits that are granted to heterosexual couples.

Here is a video that was created to tell their story that has been picked up by numerous sources.

Thanks to David Mixner for bringing this to our attention. 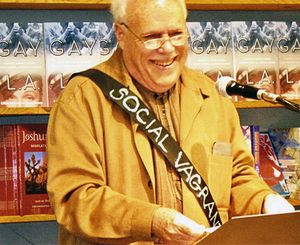 White Crane friend, advisor—and
all round mensch—Malcolm Boyd, will give a concert reading of his prayer-poems
accompanied by a jazz trio at the 2010 Sausalito
International  Film Festival on August
14. Musicians appearing with Boyd are guitarist Johnnie Valentino, composer
Scott Page-Payter on keyboards and percussionist
Marino Bambino.

Boyd's words are combined with musical themes by the late legendary
jazz musician Vince
Guaraldi. "The Anatomy of Vince Guaraldi," a new film in
which Boyd appears, will be screened at the festival. Over four weeks in 1966 a
remarkable series of performances at the hungry i
nightclub in San Francisco's North Beach captured the imagination of hip
audiences and resonated around the world. Dick Gregory gave the stage to
Guaraldi and Episcopal priest-author Boyd.  Prayers, Beat poetry and jazz
fused.  Though covered by global media the performances were never
recorded.  Very few had an opportunity to experience this happening. Until
now. The prayer-poems are from Boyd's bestselling classic "Are You
Running with Me, Jesus?"

White Crane Books offers two other titles by Boyd Take Off The Masks, his classic spiritual biography and coming out story and A Prophet in His
Own Land: The Malcolm Boyd Reader,  collected writings
from five decades.

You may remember Stuart Timmons as the co-author with Lillian
Faderman of the book Gay LA. As members of this listserv, you may also recall that about two and a half years ago, Stuart suffered a
massive stroke that left him at death's door for what seemed like a very long
time. White Crane was involved in raising the funds necessary for the additional therapy Stuart was going to need. We knew then it was going to be a long hard road to recovery.

So it is with no small amount of pride and joy we report that with the attention and loving care of his family, especially his
sister, Gay, and friends like as Mark Thompson – he's really made a remarkable
recovery! So much so that it looks like he's going to help with the
celebration of what would have been Harry Hay's 100th birthday. Nice to get
some good news!

Thompson, a member of the White Crane Advisory Board, and former editor at The
Advocate, sent this wonderful news about historian Stuart Timmons:

Longtime
friends of author and community activist Stuart Timmons gathered last week
to celebrate his remarkable recovery from a major stroke two-and-a-half
years ago. Timmons, 53, is still wheelchair bound, but is now fully
mentally alert and with the ability to speak and move about with assistance.
He is expecting a return to his research and writing about GLBT
history and is especially delighted with the invitation
to participate in Centennial celebrations honoring the life and
work of gay movement founder Harry Hay.

A
two-day conference at City University New York and a major exhibition at the
San Francisco Public Library are in the planning stages, with other
cities soon to be included. Stuart wrote the award-winning biography on the
legendary gay rights leader, The
Trouble With Harry Hay, in 1990.  Harry Hay was born on Easter
Sunday, April 7, 1912, in Worthing, England, although he lived many decades
of his life in Los Angeles.

Stuart
is doing amazing well…, had a great lunch at “The Coffee Table” and he was
alert with full memory correcting us on our history and although speaking
slowly was participating in the conversation. Well on his way to full
recovery! He spoke with Joey Cain on the phone and will be on the planning
committee for the 100 Year Celebration for Harry Hay in San Francisco and
New York City. It was a joy to be with him!

Many
of you gave support for Stuart's recovery, so we wanted to let you know
that it was money well spent. Stuart Timmons is a walking library of
GLBT history and of Harry Hay and John Burnside in particular. We need
him and we need his genius. 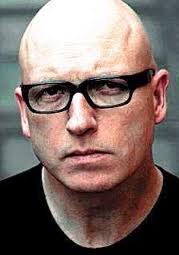 Lawrence
Brose is an experimental film artist and has created over thirty films since
1983. His films have been shown at international film festivals, museums, art
galleries, and cinematheques in the United States, Europe, Asia, Australia and
South America. Brose’s most recent film, De Profundis has been greeted with
critical acclaim and has been screened at more than eighty venues and festivals
worldwide since its release. De Profundis is a 65-minute experimental film
based on Oscar Wilde’s prison letter with an original score for the film by the
American composer Frederic Rzewski. In 1989 he began a series of film
collaborations with contemporary composers to explore the relationship between
the moving image and music.

The issues here are fundamental: freedom of speech, freedom of
expression, and artistic freedom. The case is precedent-setting, and
will help determine whether anyone exercising their right to free speech
can be criminalized merely for their ideas—a fundamental violation of
the United States Constitution.

The case of Lawrence Brose is a prime example of the contemporary
abuse of power by Homeland Security and the Justice Department. The
charges brought against Brose essentially make engaging a difficult
issue a criminal offense and recall the government’s tactics during the
McCarthy trials of the 1950s. Like that infamous challenge to
Democracy, this case questions how far the government can reach,
unopposed, into artists’ studios, galleries, museums, and even our homes
to silence free speech, thought, and inquiry.

Lawrence Brose is not a criminal, he is an artist, doing what artists
do best: asking difficult questions about our life and times in order
to illuminate a new perspective as we struggle to move forward as a 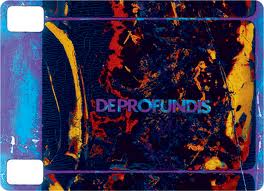 culture. His experimental cinema has a distinguished track record of
engaging issues that affect the gay community, such as AIDS and
hostility from certain segments of the public. Facing problematical
subjects is precisely the job that people like Brose carry out in our
society – they explore unexamined dilemmas and present them for our
contemplation. It is truly tragic to see him attacked with the blunt,
and misguided legalistic weapon of pornography prosecution.

Lawrence Brose is working in a well-established tradition of image
appropriation, drawing specifically on images of masculinity in home
movies, old films, Gay erotica and documentaries. Brose collects found
still images, which he then processes and re-processes to find more
depth in the picture, producing complex layers of imagery that are
highly conceptual and offer a poignant commentary on normative
conventions of gender and sexuality. The final product is as abstract as
the paintings of Willem de Kooning, and a seizure of source material
entirely misrepresents the final outcome.

As experimental filmmakers Kenneth Anger and Andy Warhol before him,
Brose’s work pushes the envelope to create space for new expression.
For our society to remain open and vibrant, the answer is not to
criminalize that space for investigation, but rather to welcome it into
the marketplace of free ideas for examination.

The case against Lawrence Brose demonstrates an inappropriate
application of laws intended to protect children, and in the process
victimizes an experimental artist seeking to comment on societal woes.
The fact that he is under indictment for using images made by others to
examine the taboos that the laws are meant to prevent–is as
overreaching as it is troubling. It is so far from the intent of the
law, that it serves only to create a climate of fear. The result is
censorship and a chilling effect on the free expression of all artists
and all people. Censorship of this nature, and in all of its many forms,
occupies a realm of self-righteous presumption that abjures complexity
and results only in contradiction. It is very important that as
individuals living in a democratic society, we contribute to and speak
out openly in Brose’s defense, in essence defending our own lives and
our fundamental rights to think, work, and create freely.

This is the first time a case of this nature will be taken to trial.
It is important to note that Brose was not searching for the alleged
images nor is he accused of producing, distributing, buying or selling
pornography. This suit will be a protracted and expensive ordeal; one
that will have a profound impact on all artists. Your support is
greatly needed and much appreciated.

This website has been published by friends, colleagues and supporters
of Lawrence Brose, an artist and arts curator who has recently been
alleged to possess purportedly illicit digital images. One hundred of
the listed images are film frames from his highly acclaimed film De
Profundis, based on Oscar Wilde's prison writing. The purpose of the
website is to attest to Lawrence’s innocence, to provide a forum for
testimony on his behalf, and, importantly, to collect funds needed for
his legal defense.

We are in the process of collecting testimony from individuals, many
of whom are artists, academics and curators significant to the fields of
art and culture.

The Lawrence Brose Legal Defense Fund is a Class A Non-Profit
Corporation registered with the State of New York. Donations are not
tax deductible. To donate please send a check payable to "Lawrence Brose
Legal Defense Fund" and mail your check to PO BOX 501, Callicoon, NY
12723. Please see the Donate Now page for additional information. Or make a donation using Paypal.

In
an enormous victory for marriage equality, a federal judge in Boston, Thursday,
July 8th, ruled, in two separate cases, that a critical part of the
federal Defense of Marriage Act (DOMA) unconstitutional.

In
one challenge brought by the state of Massachusetts, Judge Joseph Tauro ruled
that Congress violated the Tenth Amendment to the U.S. Constitution when it
passed DOMA and took from the states decisions concerning which couples can be
considered married. In the other, Gill v. Office of Personnel Management, he
ruled DOMA violates the equal protection principles embodied in the Due Process
Clause of the Fifth Amendment.

….with an
Introduction by Jay Michaelson
….and Afterwords
by Rabbi Camille Shira Angel
....and Rabbi Dev Noily