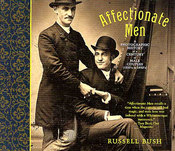 I could swear we reviewed this lovely book, but I can’t, for the life of me, find the review anywhere in the archives. Nonetheless, on what will be a hot and sweaty Gay Pride weekend, here’s a lovely slide show that is drawn from the book Affectionate Men: A Photographic History of a Century of Male Couples, 1850-1950 as well as another, Dear Friends: American Photographs of Men Together 1840-1918.

There’s a very nice song, Secretly, that accompanies it, by Jimmie Rodgers. Enjoy.