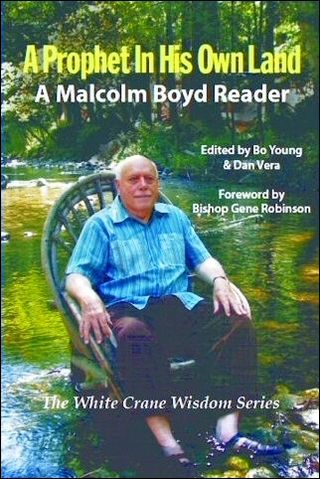 We're pleased to find out that the esteemed Richard Labonte has named our latest book (on the left there) as one of the Top Ten Nonfiction Books of 2008.

Here is what Richard had to say:

"Over the years, Boyd has written or edited more than 30  books, from which the editors have carefully culled the prose and the  prayers comprising this rich reader of a gay elder's always-questioning, never-faltering activist faith—selections spanning more than 50 years that distill Boyd's wisdom wonderfully."

I mean…it's special enough to have had the pleasure of working with Malcolm Boyd…but then we get to be acknowledged. That's the kind of thing that makes you want to get up in the morning and go to work!

And we're in excellent company…here are the other books on Richard Labonte's list:

My Miserable, Lonely, Lesbian Pregnancy, by Andrea  Askowitz (Cleis Press, $14.95) In this memoir about "40 weeks and five days in hell," Askowitz milks self-professed misery over her pregnancy for captivating comic effect. The ordeals of becoming a single mother—finding sperm, inserting it, week after dateless week—are chronicled in a diary that's winsomely whiny and harrowingly honest.

Crisis: 40 Stories Revealing the Personal, Social, and Religious Pain and Trauma of Growing Up Gay in America, edited by Mitchell Gold with Mindy Drucker (Greenleaf Press, $23.95) These personal accounts of rejection by parents, renunciation by churches, and ridicule from and physical attacks by peers link generations and genders through their depiction of the heroism of survival. In a perfect world, every school library would have a copy.

Intersex (for Lack of a Better Word), by Thea Hillman (Manic D Press, $14.95) Hillman's sprightly essays add an intersex's story—please don't call us hermaphrodites, pleads the author—to the queer literary spectrum. The author writes about a muddled medical childhood, her emergence as  an intersex activist, and the women (and men) in her life, neatly blending the political and the sensual.

The Memoirs of a Beautiful Boy, by Robert Leleux (St. Martin's $23.95) Debut memoirist Leleux bests both David Sedaris and Augusten Burroughs as a raconteur of wacky family tales with this rollicking story of growing up queer in East Texas. The author confesses to taking some license with veracity, but depictions of his gold-digging mother's fashion and surgical excesses, and of how he found himself falling in love with a Cajun choreographer, resound with wickedly sincere truths.

About My Life and the Kept Woman, by John Rechy (Grove Press, $24) Rechy writes with eloquent elegance about growing up Mexican-American in El Paso, where "Juan" often passed as "Johnny" because of the light skin he inherited from his angry Scottish father; about the double life hiding his poverty from better-off friends; about shying away from his true sexuality while in the military during the Korean War; and, most compellingly, about how he became the street-wise, tough-guy hustler of City of Night.

Sex Talks to Girls: A Memoir, by Maureen Seaton (Terrace Books/University of Wisconsin Press, $26.95) As "Molly Meek," poet Seaton tracks her passage from religious orthodoxy to sobriety and sexual exuberance—a journey marked by drag kings, butches, all kinds of over-indulgence, and a couple of kids to care for along the way—with writing that is heroically revealing and  often very funny.

King of Shadows, by Aaron Shurin (City Lights, $16.95) Shurin's brief essays reveal a multitude of selves: the young student diving with sensual pleasure into sexual San Francisco; the homemaker enthralled by how sunlight adds sheen to his natural pine floors; the "lovechild of Denise Levertov and Robert Duncan" dedicating his soul to the purity of poetry. Resonant fragments coalesce into a vibrant mini-autobiography.

Sparkling Rain and Other Fiction from Japan of Women Who Love Women, edited by Barbara Summerhawk and Kimberly Hughes (New Victoria, $16.95) Two fascinating books are crammed—small type, narrow margins—into this groundbreaking anthology. The first: illuminating essays on the sexual, social, and literary culture of Japanese women. The second: revelatory short stories (plus poetry, manga, and a screenplay) about women loving women in an overwhelmingly patriarchal culture. Part fiction, part nonfiction—but the latter makes this one special.

The Dictionary of Homophobia: A Global History of Gay  & Lesbian  Experience, edited by Louis-Georges Tin (Arsenal Pulp  Press, $44.95) More than 70 scholars contributed 160 mini-essays to this wide-ranging survey of where and how in the world homophobia continues  to resonate. It's an invaluable eye-opener for North American-centric queer activists who believe that many battles have been won. Originally published in France in 2003, this ambitious translation from a small Canadian press is an honorable achievement.

One thought on “A Prophet in His Own Land”