A must see clip:

If there was ever an object lesson in South Park's "F-Word" episode, this dickwad fag is it.

The current issue of In These Times offers a rare look at life for "Gay in Cuba."

The piece (indeed all the issue's cover stories) were translated by the Cuban-American blogger and Lambda Literary Award winner Achy Obejas.

The assessment seems to be that nothing's changed since the days of Reinaldo Arenas.

But it's great to know that there's a Reinaldo Arenas Memorial Foundation in Cuba that's working for change there.

The article is definitely worth a read.

A very interesting exchange took place last night between D.C. City council members and representatives from the Washington D.C. Archdiocese and Catholic Charities. What came through was a fascinating conversation about the use of public tax dollars to discriminate. This is in three sections. They’re posted below.

A very interesting exchange took place last night between D.C. City council members and representatives from the Washington D.C. Archdiocese and Catholic Charities.  What came through was a fascinating conversation about the use of public tax dollars to discriminate.  This is in three sections.  They're posted below.

However, Schwarzenegger vetoed AB 1185 (Lieu), which Equality California legislative director, Alice Kessler described as “a simple bill allowing better access to birth certificates for transgender people.” He also vetoed AB 382 (Ammiano), which would have established protections for LGBT prisoners, which he said was “unnecessary.”

The Harvey Milks Day bill - AB 2567  requires “the governor proclaim May 22 each year as Harvey Milk Day. It would encourage public schools and educational institutions to conduct suitable commemorative exercises on that date.” It does not make it a state holiday.

As thousands of LGBT activists prepare to march on Washington, Harry Hay, one of the most important and beloved founders of the modern gay movement, is being used by right wing extremists as a bogeyman to destroy the career of Kevin Jennings, the Obama Administration's highly qualified Assistant Deputy Secretary of the Office of Safe and Drug Free Schools.

Most recently Sean Hannity has mounted the attack.

Harry Hay is being branded as a pederast and anyone who has ever spoken praise of Harry is being condemned as a supporter of pederasty.

As one of the six heirs to the Estate of Harry Hay and John Burnside, I feel it incumbent upon myself to defend his reputation against the attacks that have become a staple of those members of the right-wing establishment who are bent on destabilizing the Obama Adminstration and destroying the careers of members of his administration through guilt by association.

Let us make it clear:

His defense of the organization at several points in his 90-year history of speaking truth to power was based on his experiences as a young teenager exploring the world of sexuality with older men, himself being the aggressor. These experiences were very positive for the young Harry and are described in Stuart Timmons’ excellent biography, The Trouble With Harry Hay. There are no records of the adult Mr. Hay ever having had sexual relations with under-aged youth. It is also innacurate to say, as it is frequently written, that NAMBLA promotes the “legalization of sexual abuse of young boys by older men.” Hay agreed with NAMBLA that in many cases initiation into sexuality, as has been the case across cultures and millenia, is better suited to those with experience than with other youth who also have no knowledge of the complexities and responsibilities of sexuality. Hay also concurred with NAMBLA that age of consent laws are out of step with the age of sexual awakening and exploration. Harry Hay’s ideas concerning youth and sexuality were based on his desire to protect youth, not to exploit and abuse them.

The second instance of his defense of NAMBLA was in 1994 at Stonewall 25: Spirit of Stonewall March in New York City. ILGA, the International Lesbian and Gay Association had been granted NGO status by the UN theprevious year. As a result, the US Senate unanimously passed a motion sponsored by the right-wing senator Jesse Helms that the USA would withhold funds of more than 118 million dollars due to the UN and its sub-organizations unless the President of the USA could certify to the Congress that no agency of the United Nations "grants any official status, accreditation or recognition to any organization which promotes, condones or seeks the legalization of pedophilia or which includes as a subsidiary or member any such organization." On June 23, the week of the march, NAMBLA was expelled from ILGA, on the motion of the executive committee, and it was decided that "groups or associations whose predominant aim is to support or promote pedophilia are incompatible with the future development of ILGA." Hay felt that if the emerging gay movement allowed the outside to define it, outside forces would then control it. It was in this context that Hay was critical of ILGA’s position and stood in defense of NAMBLA. We again stand at a similar crossroads.

It is morally and intellectually dishonest and patently false to reduce the life and work of Harry Hay to one of pederasty. He was a courageous hero who pioneered the movement for the equal rights of an entire class of people denied the basic civil rights guaranteed to them under the Constitution of the United States of America. A Dutch friend who spent some of his youth in a Japanese Concentration Camp in Indonesia told me recently that if Americans remain silent at this critical juncture in our history we will live to regret it.

Speak out. Defend the reputation of our beloved Harry Hay. 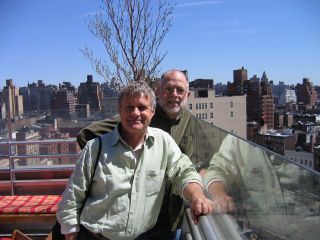 (Seen on the left with friend, and White Crane publisher, Bo Young, right.)