So, I just heard Teri Gross interview with Tom Ford about his new movie adaptation of Christopher Isherwood's story "A Single Man." Gross also asked for his opinion on the state of fashion.  He made some comments about the current state of fashion and how we imagine the body these days.  I went back to the audio to capture it.  Fascinating comments:

We are becoming post-human.  Actually we are!  We are actually starting to manipulate bodies, because we can, into a shape.  We are becoming our own art.  What happens for me is it desexualizes everything.  You know you start to become more polished or more lacquered, like a beautiful car.  Does anyone want to sleep with you?  Does anyone want to touch you?  Does anyone want to kiss you?  Maybe not, because you're too scary!  But, you're beautiful, you're glossy, you're shiny, but you're not human.  Very interesting. It's fascinating culturally."  Tom Ford in his interviewed by Teri Gross's Fresh Air

A must see clip:

If there was ever an object lesson in South Park's "F-Word" episode, this dickwad fag is it. 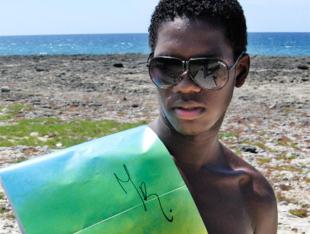 The current issue of In These Times offers a rare look at life for "Gay in Cuba."

The piece (indeed all the issue's cover stories) were translated by the Cuban-American blogger and Lambda Literary Award winner Achy Obejas.

The assessment seems to be that nothing's changed since the days of Reinaldo Arenas.

But it's great to know that there's a Reinaldo Arenas Memorial Foundation in Cuba that's working for change there.

The article is definitely worth a read.

Rachel Maddow does a masterful job of connecting the dots between Uganda's reprehensible and barbaric proposed "KILL GAY PEOPLE" law and the American Right Wing and its members in the U.S. Congress.  A must watch video clip:

The Associated Press is reporting that the Catholic Church's years-long investigation into child-abuse shows no link between homosexuality and the abuse of children.

The U.S. Conference of Catholic Bishops (infamous of late for injecting themselves in the Gay Marriage debates in Maine and now the District of Columbia, commissioned the study from the John Jay School of Criminal Justice and the results have come in:

"What we are suggesting is that the idea of sexual identity be
separated from the problem of sexual abuse," said Margaret Smith of
John Jay College, in a speech to the U.S. Conference of Catholic
Bishops.

I guess they're just to have to stow one of their canards away.

"At this point, we do not find a connection between homosexual
identity and the increased likelihood of subsequent abuse from the data
that we have right now."

You can thank Jeff Whitty (of Avenue Q) for this bit o' truth.

A very interesting exchange took place last night between D.C. City council members and representatives from the Washington D.C. Archdiocese and Catholic Charities. What came through was a fascinating conversation about the use of public tax dollars to discriminate. This is in three sections. They’re posted below.

A very interesting exchange took place last night between D.C. City council members and representatives from the Washington D.C. Archdiocese and Catholic Charities.  What came through was a fascinating conversation about the use of public tax dollars to discriminate.  This is in three sections.  They're posted below.