Our friend, Joel Singer, has his new website up and it’s wonderful. Joel is a photographer (and was poet and filmmaker James Broughton’s lover and partner for many years). Some of the images are based on Broughton titles ("Packing Up for Paradise"). There are pieces he calls "photages" and there are some fascinating cityscapes (you’ll never see a puddle in quite the same way again) and beautiful portraits. Singer has a poetic eye. Take a look.

We spent the Thanksgiving weekend in the Berkshires at the dreamy Dream Away Lodge. Daniel Osman has kept the magic happening for ten years now, and if anyone is ever in the area (Becket, MASS) it is well worth a drop-by. Good food, good music and more kitsch than you can shake a martini shaker at.

Found a really great web blog recently…well, I didn’t find it. Pete Montgomery sent the link to us. Band of Thebes, it’s called. Really smart, connected, and respectful. Something you don’t see much in Gay media these days.

And it has a great rant about Tom Brokaw’s breathtakingly bad …no, not bad…STUPID AND IGNORANT book, Boom! DO NOT BUY BOOM! I’m going to share the Band of Thebes rant here…but be sure to visit Band of Thebes.

Here’s the Brokaw rant…(not wanting to give Brokaw’s bullshit any more attention than it deserves (which would be zero) you’ll have to click on the pic to see what it’s all about.)…

Two days ago, Random House published Tom Brokaw’s Boom!: Voices of the Sixties: Personal Reflections on the ’60s and Today, which purports to explain that decade’s "profound social, political, and individual changes" and "the impact of the 1960s on our lives today" in exhaustive detail throughout nearly 700 pages.

Readers who eagerly anticipate how Brokaw will weave the story of the birth and explosive growth of the Gay rights movement into the larger narrative fabric of the times, as well as wondering how he will convey the Boomer generation’s catastrophic losses from aids, will be disappointed. He doesn’t.

His book about the social upheaval of the Sixties, and the Sixties as midwife to emerging and enduring political movements never mentions the Mattachine pickets of the White House (1965) or Stonewall (1969) or annual Gay pride parades that began on the first anniversary of Stonewall in New York, Boston, Los Angeles, and San Francisco and now span the globe, or any Gay political group. No. Instead, 1969 is noted for Woodstock, and 1970 is highlighted as having the first Earth Day. In the context of shifting mores on sex and the changing dynamics of what makes a family, gay life is ignored. Gay death is ignored too, because the index has no entry for aids. The emergence of Gay visibility in entertainment, education, religion, and business is completely erased. The book virtually never even  acknowledges gay people. No Harvey Milk, no Frank Kameny, no Barbara Gittings, no Larry Kramer. David Geffen is mentioned, once, simply as a friend of Berry Gordy’s. Oh, but there is a recap of Dick Cheney telling Wolf Blizter he was "out of line" to mention Mary.

Where there ought to be an index entry for "Gay" or "Gay rights" it says "see homosexuality" — a Victorian, not a Sixties, term — whose thirteen subcategories are shown above. Study the names: Buchanan, Cheney, Fallows, Greenhouse, Huerta, and Webb. They’re all straight. (Imagine, for a moment, a sweeping social and political history book in which all the names beneath the entry for black were Asian people, or if the entry for Jewish listed only half a dozen Catholics.)

Even these arbitrary six heterosexuals offer no true analysis of Gay issues; usually their references only include Gay rights in a list of political issues or cases before the court. The other subcategories refer to passages that are equally meaningless.  "And the women’s movement" might be a springboard for a fascinating, complex comparison of the two movements but in fact page 195 only gives the subject half a sentence, saying, in addition to dealing with tensions over the race, the women’s movement was "also divided along ethnic lines and by sexual orientation." Every reference is that shallow. Even for Brokaw’s brand of History Lite, the omission is appalling. Gay Boomers, what happened to you? And what are you going to do about it?

You just gotta love the Sisters…

A faerie friend, Roger Kuhn, has a new song and video out…check it out…

"What’s Your Name" made its national television debut this weekend and landed at #7 on the charts. Roger was nominated for three Pride In the Arts awards as the favorite male artist, song of the year and musical artist of the year, too. To vote, go here. 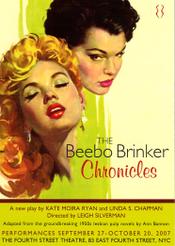 I don’t think there are books in the Gay men’s community that compare to Ann Bannon’s 50s and 60s Lesbian bodice rippers…Odd Girl Out…I Am A Woman…Women in the Shadows…and Journey to A Woman…but while the stories are women’s stories, there is a universal truth in them, about the coming out process in another time, when shame and shadows and anguish — what the Radical Religious Right would call "The Good Old Days — were the words that ruled Gay and Lesbian lives.

Bannon’s Odd Girl Out was the second biggest selling paperback of 1957…something she didn’t learn until 30 years later! The books were popular when they were first released, and have proved a remarkable longevity especially for pulp fiction, being reprinted in three different issues, and several languages. That iconic longevity, the characters and the books themselves earned her the title of "Queen of Lesbian Pulp Fiction." When depictions of Lesbians in written literature were quite rare, and what there was was dismal and unhappy, her books set her apart from other authors who wrote about Lesbianism. She has been described as "the premier fictional representation of US lesbian life in the fifties and sixties," and that her books, "rest on the bookshelf of nearly every even faintly literate Lesbian."

Last night we went to see the Hourglass Group’s production of Kate Moira Ryan and Linda Chapman’s  The Beebo Brinker Chronicles, an adaptation of three of Bannon’s books. Ms. Bannon was in attendance, looking stunning, and receiving the adulation of her fans. All of us. It was marvelous. Can’t recommend this play highly enough. If your first thought is "I’m not a Lesbian, what would this have to say to me?" you couldn’t be more mistaken. The writers could have easily played this for camp, but they didn’t. It is poignant, witty, thoroughly entertaining, smart, funny theater. There’s a fine cook’s hand at play, with just a soupçon of camp…enough to make you laugh out loud, partly from the humor, partly from the buzz of recognition. The writers (and Bannon) are word perfect in capturing the early Lesbian and Gay "zeitgeist," all the lies we all bought into before we knew we were more than the only queer on the planet.

If Logo was programming like this, instead of the dreck like "Rick and Steve" I’d probably be watching Logo a helluva lot more. This material could…should…easily be translated into one hot television series…Desperate Lesbians!

If you are, as they say, "of a certain age," Lesbian or Gay, you will see yourself up on the stage ( there is a bravura performance by Obie winner, David Greenspan, the likes of which we haven’t see since Take Me Out…as well as the marvelous performance…and buff body…of Bill Dawes, the cuckolded husband Laura leaves.)

If you’re lucky enough to have been born "post Stonewall" you need to know these stories. This is your heritage. This is where Stonewall came from.

There is something incredibly important about the "particularity of voice"…which is why we continue to insist that White Crane remains for and by Gay men. Welcoming, as they say, but we only purport to speak for ourselves as Gay men. Last night was an opportunity to hear the Lesbian voice…and it was proud and clear and true. For all of us. Brava to everyone who had anything to do with this play. By the way….Beebo playwright, Linda Chapman and her partner, Obie-award winning actor, Lola Pashalinski, have a featured article inthe fall White Crane, Lovers.

I can’t seem to find a way to paste the actual video clip here, but if you want to see an instance of an honorable politician, watch this very moving clip of the Republican mayor of San Diego, Jerry Sanders, yesterday:

White Crane Institute has been presenting Mark Thompson’s Fellow Travelers photography exhibit for the past few months at the New York LGBT Community Center. In October it will move to the William Way LGBT Community Center in Philadelphia. While it was here, Out At The Center, the LGBT Center video project, interviewed Mark and Bo about the show. Ok…so they misspelled Kilheffner, Monette and Ram Dass…the photos are stunning and the history is deep.

In November, Fellow Travelers will move to Salt Lake City in support of the Queer Spirit Retreat work Jerry Buie is doing. If you are interested in Fellow Travelers coming to your city, contact us at editors@gaywisdom.org .

Our friend Lee Mentley sent us this marvelous footage of John Rothermel and Rose Hips performing.

Faerie Camp Destiny is a wonderful sanctuary in Vermont. And the faeries there have been busy…

This is the start of the new kitchen they’re putting up. For more information about Faerie Camp Destiny…and how you can provide financial support or helping hands…go here.