This requires no explanation:

Poll: Bullshit Is Most Important Issue For 2008 Voters

It’s been a while…a long while…since SNL has been anything even approaching funny much less satirical. But their recent take on the Senate testimony of General Petraeus comes pretty darn close…it’s almost Daily Show-worthy… 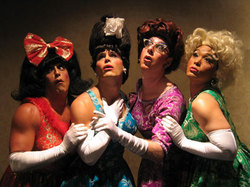 The Kinsey Sicks, America’s Favorite Dragapella Beautyshop Quartet, is seeking a serious and skilled performer for a long-term full-time commitment as an actively performing swing. We are looking for:

* Substantial stage experience
* Strong musicianship
* Great talent in comedy and comedic improvisation
* Comfort with drag performance
* Ability to portray a comic character in an ensemble context
* Ability to learn complicated 4-part vocal arrangements in limited time
* Willingness to travel, perform live, and potentially appear on screen
* Willingness to chip in on some of the less glamorous aspects of travel and performance (including stage/dressing room set-up, meeting/greeting audiences, selling merchandise after shows)
* Decent business skills, progressive politics, good communication and the ability to work in a team.

A cappella experience is a plus but not required. Being part of the Kinsey Sicks is incredibly fun. You should be too. We want you to be as excited about what we do as we are. This position is open until filled.

Send a resume to info@kinseysicks.com, along with a headshot or recent photo, plus any materials you think would help us see your skills. 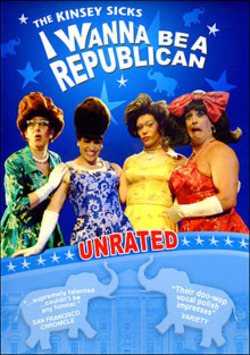 The Kinsey Sicks will be touring throughout the spring and early summer, and we will audition qualified applicants as we tour. Let us know if you can make it to any of the following places:

Please circulate this email among your friends who perform, or who sing in choruses, or who otherwise are exceptional talents who might fit well with the Kinsey Sicks.

For over 14 years, the Kinsey Sicks, America’s Favorite Dragapella Beautyshop Quartet, has served up a feast of music and comedy to audiences across the US and abroad. Combining award-winning a cappella singing, sharp satire and over-the-top drag, the Kinsey Sicks tours full time, having performed in 37 states as well as Mexico, Canada and Europe. The Kinsey Sicks have had their own Off-Broadway run at New York’s legendary Studio 54 as well as an extended run in Las Vegas. They have released five CDs and are the subjects of two feature films: "I Wanna Be a Republican," released in 2006, and "Almost Infamous," slated for release in 2008. For more information, visit www.kinseysicks.

Dan first put this on the blog way back in March of 2008. But because Tim Gunn's story relates to a Thanksgiving in his family, I thought it was a worthy piece of humor for this Thanksgiving. Enjoy…

I recently came across this video of Tim Gunn being interviewed at the 92nd Street Y by Budd Mishkin.

If you're a fan of Project Runway than  you know Gunn for his sartorial wit and this clip presents an excerpt from what seemed to be a lovely conversation.  Gunn speaks sweetly about the awkward relationship with his father who worked for the FBI.

Gunn also tells a great story about his father perhaps enabling J. Edgar Hoover's cross-dressing.  It involves Vivian Vance and is quite funny.  You've got to watch it!

A very funny piece, but also quite clarifying when the "reporter" starts challenging Rev. Jensen on the thornier part of the Bible.

My favorite line: "Lucky I had Leviticus to protect me!"

Seems relief is on the way, thanks to the Pink Tiger Research Center:

A really classic sketch from the Daily Show on an inventor of a "GAYDAR device."  You can see how young Stephen Colbert is in this one.  I’m curious to see a follow up with this inventor.  You know… just to see if there’ve been any big life changes since this was taped.

This is pretty funny.  My favorite part might be the pillow rearranging.